Interest strong for Pretty Polly Stakes at the Curragh 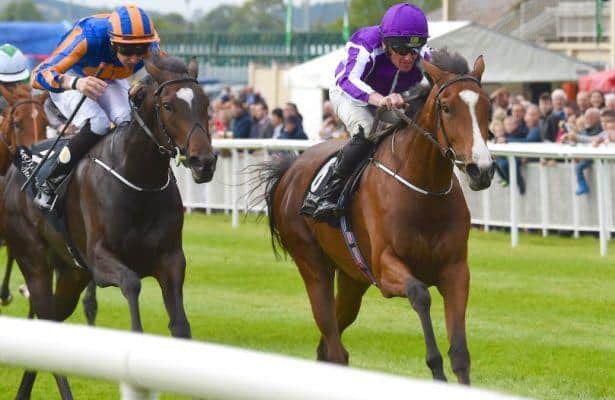 Photo: Bob Mayberger/Eclipse Sportswire
Twelve horses trained in Britain and one from France features among a total entry of 47 horses for the Group 1 Pretty Polly Stakes at the Curragh on Sunday, July 2nd.
The Aidan O'Brien-trained Minding was successful in the race last year. A winner of seven Group 1 races in all, including last season’s Investec Oaks at Epsom, she rounded off her three-year-old campaign with a win in the Queen Elizabeth II Stakes at Ascot in October. She features among a typically strong entry from Ballydoyle that also includes Group 1 winners Alice Springs, Rhododendron and Seventh Heaven, the winner of the Darley Irish Oaks here last July. Aidan O'Brien is bidding to win the race for third successive year having also won with Diamondsandrubies in 2015.
Dermot Weld, recently successful in this race with Chinese White in 2010, has entered his promising Naas maiden winner Tocco D’amore, which cost €2m as a yearling at the Goffs Orby Sale in 2015 and he has also entered Zhukova, successful at Cork on her reappearance earlier this month.
The John Gosden-trained Journey rounded off last season with a win in the Group 1 Qipco British Champions Fillies & Mares Stakes at Ascot in October and looks to head the overseas challenge at this stage. Gosden won the Pretty Polly Stakes on two occasions in recent years, with Dar Re Mi in 2009 and Izzi Top in 2012. Sir Michael Stoute won with Promising Lead in 2008 and he has entered Queen’s Trust which memorably won the Grade 1 Breeders´ Cup Filly And Mare Turf at Santa Anita in November while his Smart Call is a three-time Group 1 winner in South Africa. Charlie Appleby has entered Wuheida, unbeaten in two starts last year, including the Group 1 Prix Marcel Boussac at Chantilly in October.

Derek McGrath, CEO of the Curragh Racecourse, said: “We are delighted with the quality of entries for the prestigious €250,000 Group 1 Pretty Polly Stakes which feature a strong number of overseas entrants. The Pretty Polly Stakes is one of the key races of the Dubai Duty Free Derby Festival. We are looking forward to an exciting season with the construction of new facilities on schedule for completion in advance of the first of 18 race days taking place on Saturday 13th May.”