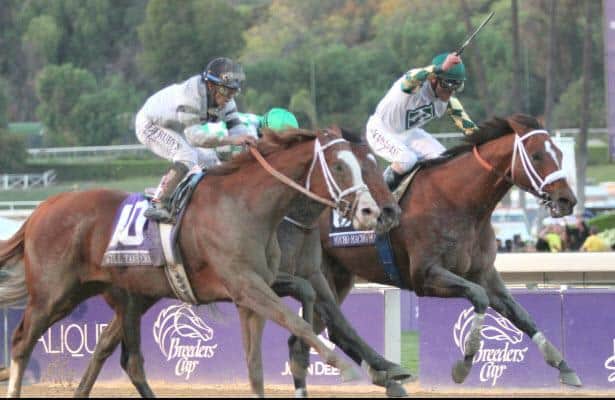 The agreement in the six-year-old multiple Grade 1 winner is for racing and breeding purposes, and is effective immediately.

Mucho Macho Man is by Adena Springs-bred and raced Champion and Breeders' Cup winner Macho Uno, who in turn is by Horse of the Year Holy Bull out of Broodmare of the Year Primal Force. Mucho Macho Man is poised to join ranks with a stallion roster that will now boast five Breeders’ Cup Classic winners: Alphabet Soup, Awesome Again, Fort Larned and Ghostzapper.

“It’s a homecoming of sorts," Stronach stated. "Our program bred Ponche De Leona to Macho Uno, before selling her with Mucho Macho Man in utero. Mucho Macho Man is not only a beautiful animal, but an incredible runner, who has already won or placed in 16 major stakes races, including the Kentucky Derby (G1) and two Breeders' Cup Classics (G1). There are not many stallion prospects anywhere in the world that can hold their top form from two through six like he has. I look forward to his races this year, and subsequent retirement to Adena Springs.”

Mucho Macho Man will continue to campaign in the colors of Reeves Thoroughbred Racing. A 14-length winner of the Sunshine Millions Classic in his last start, Mucho Macho Man has earned $5,580,410 in his 24 starts to date. Dean Reeves confirmed the arrangement with Adena Springs, saying “Patti and I are happy that we reached the agreement with Frank. Mr. Stronach has a great organization that will give Mucho Macho Man every chance to succeed as a stallion. But first and foremost we look forward to Mucho Macho Man starting in the upcoming Grade 1 Santa Anita Handicap on March 8th, and his 2014 campaign in defense of his Breeders’ Cup Classic win.”