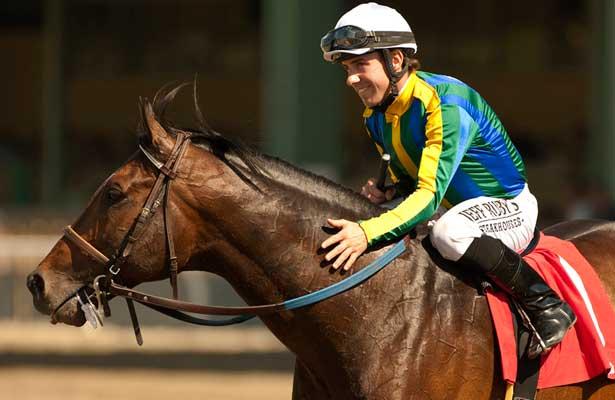 Interaction surged along the inside in the final strides to nip All Squared Away by a nose in the San Juan Capistrano Handicap (G2), the traditional closing day feature at Santa Anita Park on Sunday.

Post time favorite Sky Kingdom made the running for the first mile and a quarter of the turf marathon but there was still four furlongs to go.

Smart Ellis, aways forwardly placed under Victor Espinoza, battled for the lead around the far turn but was quickly confronted by All Squared Away.

All Squared Away inched clear in the lane but Interaction was finding his best stride and got his nose down when it counted.

Interaction, trained by Ron McAnally and ridden by Joe Talamo, covered the fourteen furlong journey in 2:44.89 and paid $10 to win.

“We had a perfect trip," said winning jockey Joe Talamo. "The whole way around I was able to save a lot of ground. Turning for home I took him out and he gave me a huge effort the last eighth of a mile. The horse that ran second (All Squared Away), you can’t take anything away from him, he was pretty hard to get by. My horse just showed a lot of heart and effort, he showed a lot of class today.”

All Squared Away was clearly second and jockey Edwin Maldonado took the blame for moving too soon.

“I couldn’t have asked for a better trip; it was beautiful," said Maldonado. "I hit the lead a little too soon and my horse kind of played around in the lane and it cost us the race. He can handle the distance, he ran a huge race at 1 ½ (miles) last out (San Luis Rey), so he ran good, but we just took the lead too soon.”

Smart Ellis held off Lime Rickey for the show. Fire With Fire was next and Sky Kingdom faded to last.