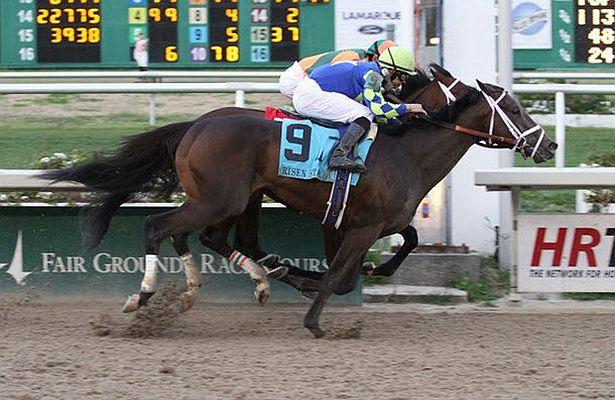 Starlight Racing and Jack Wolf’s Intense Holiday, unhurried early, commenced a rally approaching the lane, continued willingly outside the leaders throughout the final furlong and was up to best Brereton Jones’s Albano in the final stride of Saturday’s Grade II Risen Star Stakes Presented by Lamarque Ford at Fair Grounds Race Course & Slots.

Ridden brilliantly by Hall of Fame jockey Mike Smith, the Todd Pletcher trainee paid mutuels of $12, $6 and $4, toured the 1 1/16-mile distance in 1:43.86 and increased his lifetime earnings to $351,900 with his second win in seven career starts.

“In the very beginning he kind of slipped leaving there which turned out to be a good thing,” said Smith.  “He was a little too keen early, so when I finally talked him out of it he just completely let go and I was like,’uh, no, not that much.’”

“There’s a lot of room to improve there and a lot of room to grow,” said Smith.  “What I really liked at the end was galloping out.  He took one breath and came back so we did not get to the bottom of him (today).”

Runner-up Albano, who finished second in Fair Grounds’ Grade III Lecomte Stakes on Jan. 18, was ridden once again by Kerwin Clark for trainer Larry Jones and was valiant in defeat.  He made the pace with early fractions of 24.30 and 48.14, continued with good courage throughout the stretch run, could not withstand the winner at the wire but clearly held the place by 5 ½ lengths from Ken and Sarah Ramsey’s Vicar’s in Trouble, the 6 ¾-length winner of the Lecomte.