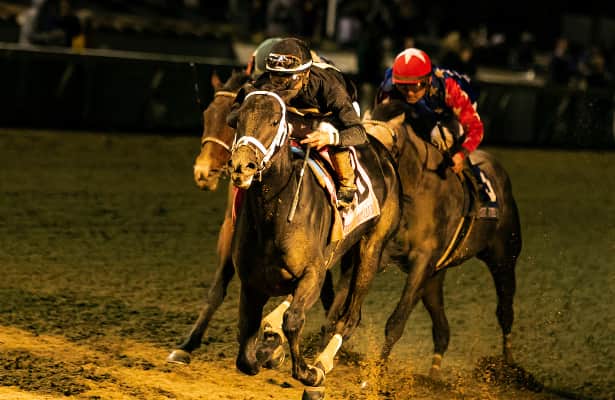 He got out of the gate about a half-step late, and he was trying to run into a historically slow, early pace Saturday night.

Instant Coffee (3-2) still got the job done, thanks in part to his hot jockey Luis Sáez as well as some good breeding. The 2-year-old colt by Bolt d’Oro out of the Uncle Mo mare Follow No One overpowered eight rivals with a strong run down the middle of the track to win by 1 1/4 lengths in the Grade 2, $400,000 Kentucky Jockey Club Stakes at Churchill Downs.

“The pedigree pulled through,” said winning trainer Brad Cox, who watched Instant Coffee step forward in a stable that includes a string of legitimate Kentucky Derby hopefuls like Loggins, Giant Mischief and Tapit’s Conquest. “He’s bred to go a mile-and-a-quarter, maybe longer, and he kept coming.”

At 1 1/16 miles, the win was the sixth on Saturday’s card for Sáez, 30, a Panamá native whose only better day came Jan. 24, 2018, when he won seven races at Gulfstream Park. As it was, it was only the 14th time in the 147-year history of Churchill Downs that one rider had so many wins in a single day.

“I tried to just ride confident and see what happened,” said Sáez, who missed the single-day track record of seven wins but moved tantalizingly close to clinching the riding title for the fall meet that ends Sunday. “The horses have been running pretty good for me, and everything’s coming perfect.”

Saturday’s feature did not start that way, though. Instant Coffee was seventh coming out the gate on a dry, calm, 51-degree night. By the time Gigante (24-1) led the field through the first quarter-mile in the clubhouse turn, Instant Coffee had spotted him four lengths while traveling four wide.

“I was a little concerned with the way he broke and kind of let some of the other horses get away from him as wide as he was,” Cox said. “But Luis is a good, aggressive rider. Once he starts asking, he stays after them, and they run with confidence.”

Instant Coffee had made up 1 1/2 lengths in the next two furlongs, but Gigante still was setting a crawling pace. Cyclone Mischief (6-1) took the lead in the second turn, where Instant Coffee raced five wide into fifth place, now 1 3/4 lengths behind. The fractions of 24.76, 50.00 and 1:15.02 were the slowest for the Kentucky Jockey Club since at least 1991, the earliest that Equibase had charts posted for the race.

“That was going to be hard to close into, absolutely,” Cox said. “I was very concerned that he might level off or flatten out as wide as he was and as soft as the pace was up front.”

Cox’s concerns were allayed as Sáez clearly had more horse than the other closers. He put Instant Coffee into the lead with a little more than 100 yards to go, and there was no doubt after that who would win.

“Today’s race was a bit pace-less, and we were behind (Cyclone Mischief) down the rail and crowded,” said Tom Amoss, who trained Iroquois (G3) winner Curly Jack (5-2) to a stalking, second-place finish Saturday. “It’s like being in a traffic jam on the interstate. Nowhere to go around, and you can’t go in front. We just had to wait and wait and wait. It really cost us.”

Hayes Strike (22-1), who finished second in a sloppy running of last month’s Street Sense (G3) over the same course and distance, closed from next to last to finish third, missing second by a head but getting a nose in front of fourth-place Red Route One (9-1). Denington (14-1) closed to finish another nose back in fifth. The top five finishers were awarded 10-4-3-2-1 points toward qualifying for the 2023 Kentucky Derby. Gigante, Cyclone Mischief, Freedom Trail (5-1) and Western Ghent (64-1) were sixth through ninth in that order.

A slow start, a slow pace and a comeback from a distant, fourth-place finish seven weeks ago in the Breeders’ Futurity (G1) at Keeneland. Those factors gave the $200,000 colt owned by Al Gold – he of Cyberknife fame – the sort of seasoning that should come in handy later on the Kentucky Derby trail.

“We’ve got a good group of colts. I feel like from top to bottom this is the best group we’ve ever had,” said Cox, who won the 2021 Derby when Mandaloun eventually was promoted over the disqualified Medina Spirit. “It’s a long way to the first Saturday in May. I do know that. We’re very proud of what this horse accomplished today, and we’ll start working our way back from there.”

Instant Coffee became the 15th Kentucky Jockey Club winner in the past 22 years to make up at least 3 1/2 lengths at any given call. His next stop will be at Fair Grounds, where the Gun Runner on Dec. 26, the Lecomte (G3) on Jan. 21, the Risen Star (G2) on Feb. 18 and the Louisiana Derby (G2) on March 25 also are Kentucky Derby points preps.

“We don’t know anything about a race yet,” Cox said.

“He’s a pretty good horse,” Sáez said. “I feel like he’s going to improve a lot. He has more to learn, because when he came to the straight, he kind of looked around. But I think he’s going to be all right for the future.”