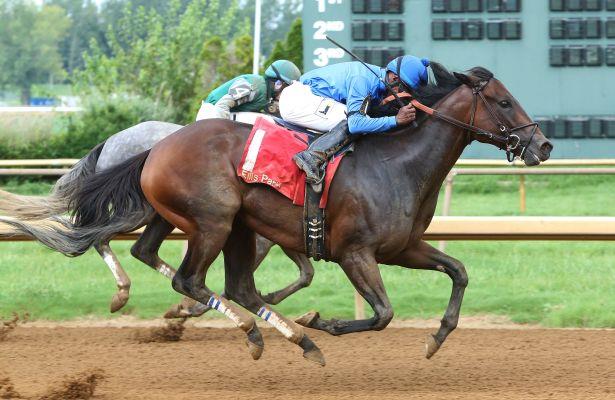 Godolphin Racing's Grade 3 Groupie Doll winner Innovative Idea is set to make her New York debut as she takes on six local rivals in Saturday's Grade 3, $200,000 Turnback the Alarm for fillies and mares at 1 1/16 miles on closing weekend at Belmont Park.

Trained by Eoin Harty, Innovative Idea rebounded from a pair of off-the-board finishes earlier this year to post back-to-back stakes win, first winning the Iowa Distaff in July, where she registered a career-high 90 Beyer Speed Figure with a three-quarter-length victory, and followed up with her first graded stakes win, taking the Groupie Doll by a half-length on August 6.

Most recently, the 4-year-old Bernardini filly dictated the pace in the Grade 3 Locust Grove on September 17 before getting reeled in late to finish third.

"She's just been in phenomenal form through the summer and fall," said Harty. "She's always been a talented filly but she's training as good as I've ever seen her, especially since her last race. There's not much to her - she's only 15 hands, she's compact - but she loves what she does. She loves to run. I'm very optimistic about our chances."

Hall of Famer John Velazquez picks up the mount aboard Innovative Idea, installed at 6-1. The pair will depart from post 4.

The Kentucky import could face her stiffest challenge from Alpha Delta Stable's homebred Lewis Bay, tabbed as the morning-line favorite at 6-5.

A 1 ½-length winner of the Grade 2 Gazelle at Aqueduct Racetrack in April, Lewis Bay boasts a win and two seconds from her three Belmont starts, including a runner-up finish to Off the Tracks in the Grade 1 Mother Goose on July 2. The sophomore daughter of Bernardini shortened up to seven furlongs in her last start, finishing fourth in the Grade 1 Test on August 6.

"We're going to get her stretched out in distance a little bit," said trainer Chad Brown. "She's training very well and she likes the track."

Lewis Bay will be ridden by Irad Ortiz, Jr. from post 2.

Flora Dora will get back to the dirt in the Turnback the Alarm, following a 10th-place finish in her grass debut on September 15 for Coffeepot Stables and trainer Marialice Coffey. Third to Songbird in the Grade 1 Coaching Club American Oaks this summer, Flora Dora, 10-1 on the morning line, picks up jockey Jose Ortiz and will break from post 3.

"We've made a couple of changes," said Coffey, "and we're getting Jose, which we're very excited about. She's training super. Maybe this race being a little further out from the other one will help her."

Rounding out the field for the Turnback the Alarm, set as Race 4, are Rachel's Temper, winner of the Summer Colony this summer, for owner Newtown Anner Stud and trainer Charlie Baker, and a pair from the barn of Gustavo Delgado in Linda Mimi and Smartly Agree.

Joining the Grade 3, $200,000 Bold Ruler and the Turnback the Alarm is the $100,000 Awad for 2-year-olds at a mile on the Widener turf, attracting a competitive field of nine as Race 6 on the final Saturday card of the Belmont fall meet.

Almaddah Abdullah Saeed's Royal by Nature will look to lead the charge as the tepid 3-1 morning-line favorite for trainer Brad Cox. Winner of the Sunday Silence on September 10, the Irish-bred Myboycharlie juvenile returned the following month with a fourth-place finish in the Grade 3 Bourbon at Keeneland.

Royal by Nature will leave from post 7 with Irad Ortiz, Jr. in the irons.

As the 7-2 second-choice on the morning line, Frostmourne was fourth in his stakes debut, finishing behind Breeders' Cup Juvenile Turf hopefuls Oscar Performance, J. S. Choice and Kitten's Cat. The Green Lantern Stables homebred will be ridden by Jose Ortiz from post 2.