Inherit the Gold Seeks Another Excelsior 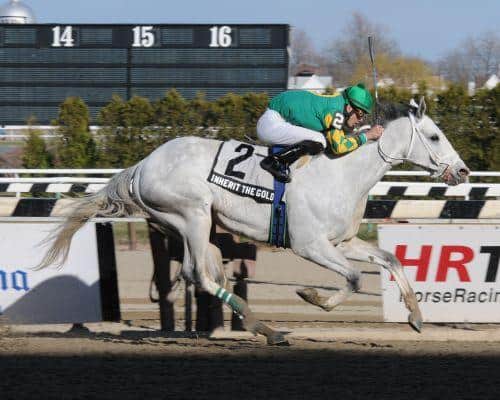 Saturday's Grade 3, $150,000 Excelsior at Aqueduct Racetrack, the final stakes before racing moves to the main track on March 21, has drawn a cast that is not only familiar, but consistent - in 21 starts over the Big A's inner track, five of its six entrants have combined for a record of 13-6-0.

Returning for his 11th start over the winterized track is New York-bred stalwart Inherit the Gold, winner of last year's 1 1/8-mile Excelsior. Now 6, the light gray gelding is returning to open company for the first time since a second-place finish to eventual Santa Anita Handicap winner Ron the Greek in the Queens County in December. Most recently, Inherit the Gold finished second as the favorite in the Mr. G. J. C. on February 12, having opened 2012 with a 6 ¼-length triumph in the Haynesfield.

"I don't see a lot of different between him this year and last year," said Jim Hooper, who trains "Harry" for his wife, Susanne, and Glas-Tipp Stable. "He still seems to enjoy what he's doing, and I'm sure on Saturday he'll come with his game face on."

Last spring, Inherit the Gold capped a five-race win streak with a 6 ¼-length score in the Excelsior, which was run over the main track. On the inner track, the son of Gold Token is 6-2-0, including victories in the Kings Point and the Mr. International overnight stakes.

"I don't know if it's so much a matter of him liking the inner track as he's coming around at the right time," said Hooper of Inherit the Gold, who drew post position 3 at 6-1 on the morning line with Eddie Castro aboard. "I think he's run well elsewhere, too. The important thing Saturday is it looks like there will be plenty of speed for him to run at."

Among those expected to contest the pace is Redding Colliery, who in only his second start in 14 months handed 4-5 favorite I Want Revenge a front-running, two-length defeat in the Evening Attire on January 28. The 6-year-old son of Mineshaft is 2-for-2 on the inner track, having also won an optional claimer in January 2010.

"He's acting a little speedy this year," said Art Magnuson, assistant to trainer Kiaran McLaughlin. "We gave him a little blowout [Wednesday] morning, three furlongs in :35 and change, just to stretch his legs. We expect he'll be forwardly placed; we'll leave it up to Alan [Garcia]."

Carrying the colors or Mrs. Fitriani Hay, Redding Colliery will leave from the rail and was listed as the 5-2 second choice on the morning line.

Favored at 2-1 on the morning line is the speedy San Pablo, who came a nose short of being a perfect 3-for-3 on the inner track when a game second to fellow Excelsior starter Marilyn's Guy in the As Indicated overnight stakes on February 18. Prior to that, the 4-year-old Jump Start colt fashioned back-to-back wins in a pair of overnight stakes, all in tandem with jockey Cornelio Velasquez.

"He's going to go to the lead, obviously," said Whit Beckman, assistant to trainer Todd Pletcher. "If he doesn't have to put up with too much on the lead, he's perfectly capable of running a big race. Hopefully, he'll get the kind of scenario he likes."

Velasquez is back aboard the Burning Sands Stable color-bearer from post position 4.

Carrying high weight of 123 pounds is an inner-track newcomer, Birdrun. Trained by Hall of Famer Bill Mott, the 6-year-old son of Birdstone is making his 2012 debut in the Excelsior, having finished second to Afleet Again in the Breeders' Cup Marathon last time out. Winner of the 2011 Grade 2 Brooklyn Handicap, in which he defeated his stablemate Drosselmeyer, the eventual Breeders' Cup Classic winner, Birdrun also counts last year's Greenwood Cup on his resume, having been awarded the victory via disqualification.

"He looks fantastic," said Leana Willaford, Mott's assistant. "He came in Monday morning [from Florida] and I've had him on the track for two days. This race is a good place for him to start off the year."

Owned by Preston Stables, Birdrun drew post position 2 and was listed at 5-1 on the morning line. Junior Alvarado will ride.

Completing the field is Norman Asbjornson, winner of an optional claimer at Parx Racing on January 28.