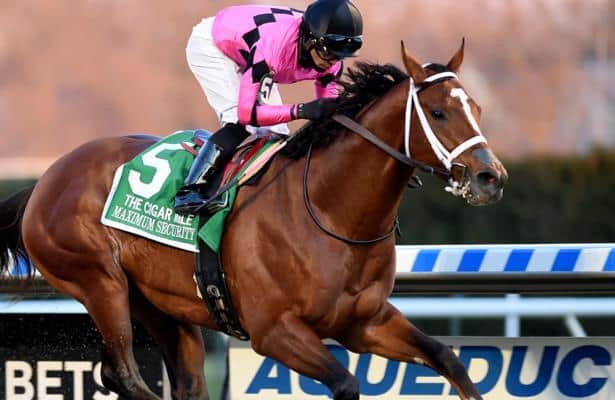 With the dust still settling from Maximum Security’s historic disqualification from the 2019 Kentucky Derby last June, trainer Jason Servis nearly had another controversy on his hands.

According to an indictment handed down Monday by the U.S. District Attorney’s Office of the Southern District of New York, which includes extensive allegations of Servis doping his horses with an illegal substance, Maximum Security had received a shot of SGF-1000 in the days leading up to his return race. But New Jersey regulators wanted a drug test.

The colt, already a winner of the Florida Derby (G1) and first across the wire in the Kentucky Derby, was to make his comeback in the June 16 Pegasus Stakes. In his system was a substance that, per the indictment, “is a customized (performance-enhancing drug) purportedly containing ‘growth factors.’”

Veterinarian Kristian Rhein, named as a defendant, reassured Servis, saying, “There’s no test for it in America.”

RELATED: Wests waiting to hear Servis' side of the story

Still, SGF-1000 could show up as a positive for the anti-inflammatory dexamethasone, more commonly referred to as “dex.” According to the indictment, Servis had another veterinarian falsify records saying Maximum Security was administered dex in case the test flagged it.

The Gary and Mary West homebred was beaten across the wire for the only time in his career in the Pegasus after a stumble at the break. Since then, he went on to earn the Eclipse Award 3-year-old championship with victories in the Haskell (G1) and Cigar Mile (G1). On Feb. 29, Maximum Security debuted as an older horse with a victory in the $20 million Saudi Cup overseas.

As the Wests continued to fight the legalities of the first Kentucky Derby disqualification for interference in the race’s history, Servis was allegedly drugging his star colt.

Servis’ misdoings may have come on federal investigators’ radar when they looked into fellow trainer Jorge Navarro, who the U.S. District Attorney’s Office says conducted a “widespread scheme” to obtain, conceal and use illegal substances on his racehorses.

On March 5, 2019, a call between Servis and Navarro was intercepted during which, according to the indictment, Servis recommended SGF-1000 to Navarro.

“I’ve been using it on everything almost,” Servis said, according to the indictment.

Navarro said he had more than a dozen horses using SGF-100. The conversation didn't last much longer.

In addition to stabling in New Jersey last summer, Maximum Security spent time in New York as connections mulled a run at the Travers Stakes (G1) at Saratoga. Accordingly, Servis’ New York-based assistant, Henry Argueta, is also named as a defendant in this case.

On May 8, 2019, investigators tapped into a conversation between Servis and Argueta about administering PEDs to World of Trouble, who the next month won Belmont Park’s Jaipur Invitational (G1) in his career finale.

To hide the use of PEDs in horses, Servis enlisted people such as Alexander Chan, who according to his LinkedIn profile has worked as a track veterinarian for the New York Racing Association since October of 2012. According to the indictment, Chan kept “false billing records that did not reflect drugs Chan had injected into racehorses under Servis’ control, and falsified his own prescription records” in an effort to conceal their use from investigators.

There were close calls, too.

Documents detail a Feb. 18, 2019, conversation via text message between Servis and Navarro. Servis warned his peer of a racing official near the barn where PEDs were stored and administered. In an intercepted call Navarro made later that day to another party, Navarro said, "He would've caught our asses f------ pumping and pumping and fuming every f------- horse (that) runs today.”

While legal outside of withdrawal times at racetracks, clenbuterol is another substance that appears in findings about Servis. Chan is said to have provided it to Servis’ horses with a valid prescription. Investigators also heard Servis and his assistant, Argueta, discussing “the illegality” of clenbuterol uses in a horse.

Recently, Hall of Fame finalist Mark Casse advocated for a total ban on the respiratory treatment which when used in excess can act as a steroid. In an op/ed published March 2 by The Thoroughbred Daily News, Casse wrote that clenbuterol “leads to unimaginable form reversals on a weekly basis,” something for which Servis is often chided about by gamblers.

In a July 2018 interview with Horse Racing Nation, Servis denied cheating while on a personal hot streak, winning at the time with 54 percent of starters at Monmouth Park and 49 percent at Belmont Park.

He defended his record, saying he spots horses carefully and can thus be expected to win more often.

Indicted on two counts, Servis faces a maximum sentence of 10 years in prison.

That was months before Maximum Security debuted the following December at Gulfstream Park with a $16,000 claiming tag, then ascended to become the world’s best dirt horse in training.