Indiana Oaks could fill a blank on venerable rider's record 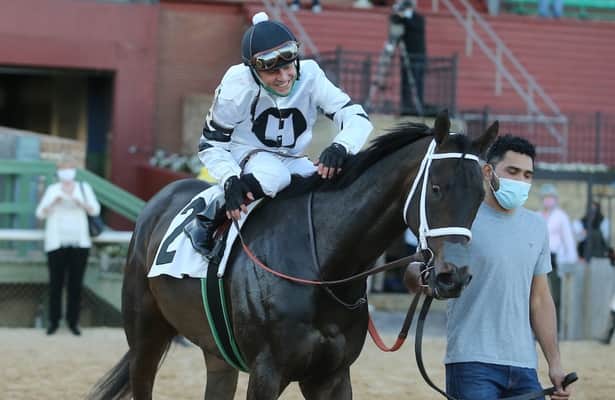 Court’s last of three titles in Indiana came in 1998. But at age 60, he retains his ability and drive to continue to compete on the tough Kentucky-Oaklawn circuit. Look no further than Court riding the Dallas Stewart-trained favorite Will’s Secret in Wednesday evening’s $200,000, Indiana Oaks (G3) at Indiana Grand. Owned by breeder Willis Horton, Will’s Secret comes into the 1 1/16-mile Indiana Oaks off a third place in the Kentucky Oaks at 26-1 odds and an earlier victory in Oaklawn’s Honeybee Stakes (G3).

“Will’s Secret, she really performed incredible in the Oaks this year,” Court said. “I was in the perfect spot. I couldn’t have asked for a better trip. She kicked in and was just third best that day. She’s great to ride, and I’m just excited that we’re going in the Indiana Oaks, and I just want to make all the connections very happy and we’re celebrating in the winner’s circle.

“… The fact that we won the Honeybee at Oaklawn really set us on the path to the Oaks and solidified our entry to run in the Kentucky Oaks. It was exciting from that day forward. She’s been fun from the get-go. And then when you get the top level of success that you get to experience in this game from time to time, it’s just the icing on the cake.”

Will’s Secret will break from post 1 in the field of 11 3-year-old fillies.

“Basically, the pressure is all going to be on the outside,” Court said. “I’m just going to let her break, run away from there and position where we can get the best strategy to work favorably for us.”

Since he began riding races in 1980, Court has won stakes in five decades (including taking the Indiana Derby at Hoosier in 2002 and 2003, during a span when the jockey had relocated to California). Overall, he has 4,212 wins and more than $109 million in purse earnings. He continues to ride occasionally at Indiana Grand, but his summer focus is three hours away at Ellis Park in Henderson, Ky.

“I’d been in and out of Kentucky during my career,” the jockey said. “But when Indiana started racing, I came and set some roots and pretty much became the king there at Hoosier Park on the Indiana circuit. Those stats still hang pretty well today. It helped me open the door to get more solid footing on the Kentucky racing circuit. It’s just been a fun ride ever since. I’m not going anywhere. I plan on sticking around.”

Indeed, how does he do it at age 60, competing against jocks who could be his grandkids?

“A lot of people ask me how I do it, and I sometimes wonder that myself,” Court said. “I just spend enough time on my knees praying and eating right, trying to live right and just keep showing up every day with the right attitude to ply my skills – and it’s all good.”

A case could be made that Court fosters one bad habit: His affinity for off-track action. While he certainly has had his share of injuries on the track, Court had shoulder surgery in 2018 after a motorcycle accident, which came two years after sustaining broken ribs while water-tubing.

“I’ve been an adrenaline junkie my entire life,” he said. “I love riding racehorses. That’s my No. 1 top priority, and I’ve been blessed to be able to make a living off of it. But I’ve also been on motorcycles and done some other activities that are probably not always healthy; sometimes you get a little carried away. … I’ve had my fair share of injuries, no doubt about that. But I’ve been able to bounce back and get back into the game – something I’m very fortunate to do. But I am by far more cautious of my other activities now.”