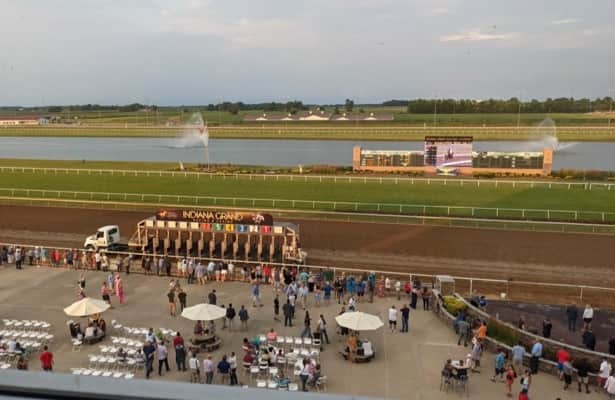 After hopping straight up while her eight rivals went forward out of the gate, Soothsay (2-1) looked like she had no hope of winning Wednesday evening in the Grade 3, $200,000 Indiana Oaks.

But as bad a start as the Raydelz Stable homebred had, she was about to uncork as good a finish.

Flavien Prat rode Soothsay patiently, guiding the lightly raced Distorted Humor filly to mid-pack before she showed a decisive burst of speed in the final turn on the way to a thrilling victory at Indiana Grand.

“She was really tense in the gate,” Prat said. “I couldn’t get her to relax. She broke in the air. So from that point I just wanted her to travel well, to regroup well. I was traveling really well down the backside and tried to make my way closer to the lead. She really dug in to get the win.”

Upset-minded Moon Swag (40-1) was caught at the wire, finishing a neck behind in second. Lady Aces (10-1) was another head back in third with Marion Francis (9-1) yet another neck behind in fourth.

“I’m so proud of her, so proud,” said co-owner Dell Hancock, whose Raydelz partners are Ramona Bass and Adele Dilschneider – and whose new winner came out of their Bernardini mare Spellbound. “The mare had some bad luck, and this is the first (foal) that’s really had a chance.”

With only three previous races to her name, Soothsay was nearly as far behind as she was in her debut victory in February at Santa Anita. This time she spotted the field 7 1/2 lengths after a quarter-mile. With five-sixteenths of as mile left, she was still six lengths behind.

By then, early pacesetter Lovely Ride (3-1) faded on her way to finishing fifth. Moon Swag took over the lead and would have been a winner had the race been a few strides shorter. And had Soothsay not been in the race.

It was only the fourth race for Soothsay. After her maiden-breaking win, she came back in April for a victory in the Santa Anita Oaks (G2). Then she was a beaten, odds-on favorite when she lost to Crazy Beautiful on May 30 in the Summertime Oaks (G2), also at Santa Anita.

As for what is next, Hancock was less inclined to specify a race and more in the mood to celebrate.

“It’s a dream,” she said. “You’ve got to think she’ll run all day. So just see how she comes back and go from there.”

The field was reduced to nine with Kenny McPeek scratching his two long shots. He said Forever Boss would be pointed elsewhere, and Oliviaofthedesert’s “ankle didn’t look good” after she had shipped from Kentucky to the track a half-hour from Indianapolis.