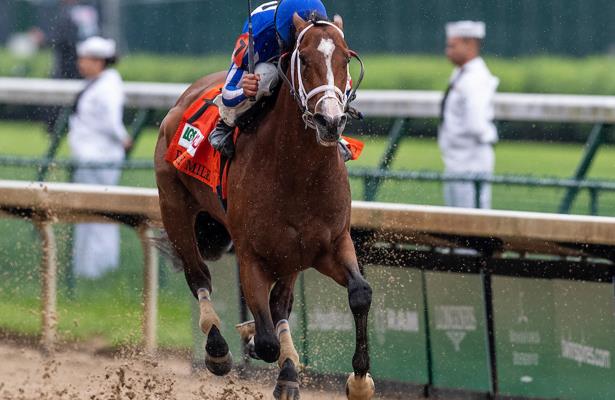 Breaking from post No. 11, Mr. Money is the 6-5 favorite for Saturday night’s 3-year-old showcase at Indiana Grand.

The race includes three familiar names from the Triple Crown races in Alwaysmining (11th in the Preakness Stakes), Gray Magician (19th in the Kentucky Derby) and Long Range Toddy (promoted to 16th in the Derby after interference from Maximum Security).

Alwaysmining and Gray Magician are 8-1 on the morning line, behind Mr. Money and 9-2 second choice Math Wizard, second in the Ohio Derby (G3) last out.

Here’s a look at the field:

TimeformUS’ Pace Projector expects Mr. Money to come in from the far outside post and set the early pace. The three Triple Crown runners, especially Gray Magician, are all expected to press Mr. Money on the pace.

The race’s longer shots are expected to try to come from either the middle or back of the field.

TVG will air the race, which goes to post at 10:02 p.m. ET, along with the preceding undercard at Indiana Grand. Of course, the races can also be live streamed on advanced deposit wagering services such as NYRABets.

There are five other stakes on tap Saturday at Indiana Grand, highlighted by the $200,000 Indiana Oaks (G3). Larry Jones trainee Street Band, sixth last out in the Kentucky Oaks, is the 5-2 morning line pick.

The field is set for the 25th running Saturday of the $500,000 Indiana Derby at Indiana Grand.

Mr. Money, the talented three-year-old son of Goldencents, has been tagged as the early morning line favorite at odds of 6-5 despite the outside post 11 in the race.

Mr. Money, owned by Chester Thomas’ Allied Racing Stable, LLC based out of Madisonville, Ky., has been a late bloomer for his connections.

Early setbacks kept the experienced graded stakes performer off the Kentucky Derby trail, but his performances in the past two starts, both Grade 3 wins, make him a major threat for the title in Indiana’s richest horse race.

“That wasn’t what I was hoping for, but it’s not a big deal,” said trainer Bret Calhoun on drawing post 11. “I’d rather have been inside a few post positions from there. But he’s got speed.

“If he can get away all right, he’ll be fine. You’ve got the potential of being hung out there a little bit (around the first turn), but he gets away sharp. He’s fast enough. I don’t know how much speed is in there, but he’s a pretty fast horse. If he gets away sharp, he ought to be able to get himself a decent position and not have to worry about getting hung too wide.”

Regular rider Gabriel Saez will come into ride Mr. Money, who has won two of four starts this season and accumulated a bankroll of nearly half-million dollars.

Joining Mr. Money as a major contender is Long Range Toddy from post nine at odds of 12-1 with veteran rider Jon Court aboard.

Court, who has won the Indiana Derby twice in the 24-year history of the race, guided the Take Charge Indy colt to a third-place finish in his last start in the Ohio Derby (G3).

Prior to that start, Long Range Toddy competed in the Kentucky Derby and was impeded around the final turn to be placed up to 16th.

Steve Asmussen trains Long Range Toddy, who was a winner of the Rebel Stakes (G2) at Oaklawn Park earlier this year.

With more than $900,000 in earnings, a win in the Indiana Derby would generously place Long Range Toddy over the $1 million mark.

Gray Magician and Ricardo Santana Jr. come into the Indiana Derby off a last start in the Kentucky Derby.

The Graydar colt, trained by Peter Miller, traveled overseas to the UAE Derby (G2) at Meydan Racecourse where he finished second prior to his run in the Kentucky Derby.

Gray Magician starts from post three at odds of 8-1.

“He’s tactical, so the three post should be just fine,” Miller said. “We can break and get a position either in or just behind the first flight.”

Another contender that is Graded Stakes placed is Roiland from post one for the Tom Amoss barn.

Amoss, a six-time leading trainer at Indiana Grand, sends his Successful Appeal colt into the Indiana Derby off a fifth-place finish in the Oaklawn Invitational Stakes in early May.

His best finish to date was in the Risen Star Stakes (G2) at Fair Grounds where he finished a hard charging third.

DeShawn Parker, second in the current jockey standings at Indiana Grand and winner of more than 5,500 career races, has the call from post one at odds of 12-1.

“There’s no secret as to where Roiland will be early in the race,” Amoss said. “Drawing the rail post position not only allows us to save ground, but we won’t have to move over to get to the rail at the start.”