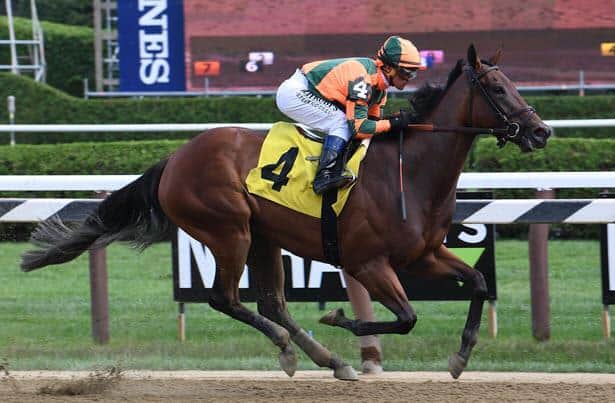 Indian Pride, trained by four-time Eclipse Award-winner Chad Brown, returns to the scene of her impressive unveiling in search of her first stakes score in Friday's $85,000 Shine Again, a seven-furlong main track sprint for older fillies and mares at Saratoga Race Course.

Owned and bred by Brereton C. Jones, the 4-year-old Proud Citizen filly is a half-sister to multiple graded-stakes winner Biofuel, who took honors as Canada's Horse of the Year in 2010.

Indian Pride turned heads in her Aug. 28 debut when eighth lengths the best in a six-furlong maiden sprint won in frontrunning fashion for a career-best 90 Beyer Speed Figure. She followed up with a prominent third in the Grade 2 Raven Run at Keeneland to close out her juvenile campaign.

The talented bay made her seasonal debut a winning one last out on June 20 at Belmont Park, capturing a 6 1/2-furlong allowance sprint by 2 3/4 lengths under Hall of Famer Javier Castellano.

"She came back off that effort really well," said Brown. "We're looking forward to get her going again."

Indian Pride breezed an easy half-mile in 50.50 seconds on July 10 on Belmont's dirt training track in preparation for the Shine Again. She will exit post 5 under Castellano.

Cleber J. Massey's Blamed, a 5-year-old daughter of Blame, boasts a record of nine wins and two seconds from 15 starts and purse earnings of $583,065. A multiple graded-stakes winner, she captured the 2018 Comely (G3) at Aqueduct and the 2019 Royal Delta (G3) at Gulfstream Park.

The ultra-consistent bay has already picked up a pair of optional-claiming wins this year scoring at Gulfstream in February and at Oaklawn Park in April. Last out, on June 13 in the Ogden Phipps (G1) at Belmont Park, Blamed made the early running before fading to fourth.

Heider Family Stables, Madaket Stables and Doheny Racing Stable's Please Flatter Me, trained by Hall of Famer Steve Asmussen, sports a ledger of four wins and two seconds from eight starts. The dark bay daughter of Munnings, bred in Pennsylvania by Mary Katherine Haire and purchased for $12,000 at the 2017 Fasig-Tipton Midlantic Winter Mixed Sale, has banked $272,428 for her connections.

Please Flatter Me won all three of her juvenile starts including the Blue Mountain Juvenile Fillies at Penn National and the Gin Talking at Laurel Park. She launched her sophomore season with a fourth in the Busher Invitational at Aqueduct and followed up with a second in the Miss Preakness (G3) at Pimlico Race Course won by Covfefe, last year's Champion Female Sprinter and Champion 3-Year-Old Filly.

Following a win in the Alma North at Laurel Park, Please Flatter Me tried her luck in the Longines Test (G1) when seventh to close out her sophomore season.

After finishing second to multiple Grade 1-winner Guarana on June 4 at Churchill Downs in her seasonal debut, Please Flatter Me will look to become a stakes winner at two, three and four in the Shine Again.

"She's a big filly," said co-owner Scott Heider of Heider Family Stables. "If you look at her, you don't think she would be a sprinter. I was happy with her comeback race. She was really running hard there at the end and put some distance between her and the third-place finisher."

The Pioneerof the Nile bay, bred in Kentucky by Santa Rosa Partners, raced three times in a tumultuous sophomore campaign in which she finished last-of-eight in the Grade 2 Rachel Alexandra at Fair Grounds before a prominent second in the Grade 2 Gazelle at the Big A. Sent to post at 44-1 in the Grade 1 Kentucky Oaks under Manny Franco, Positive Spirit was pinched between rivals at the start before clipping heels with Jaywalk and tumbling to the track unseating her rider.

Out of the graded-stakes winning In Excess mare Above Perfection, Positive Spirit is a half-sister to 2017 Kentucky Derby-winner Always Dreaming and 2009 Spinaway (G1) victress Hot Dixie Chick.

Tyler Gaffalione, who guided Positive Spirit to her maiden win in November 2018 at Churchill, has the call from post 3.

Ghost Hollow Farm's Risky Mandate owns a perfect in-the-money record of 4-2-1-1. Unraced as a 2-year-old, she was a first-out winner at Churchill Downs in June 2019 and followed up with a smart allowance score a month later at Saratoga.

The Tom Amoss-trainee completed her sophomore season with a third in the Prioress (G2) at the Spa. Bred in Kentucky by her owners, the Strong Mandate bay rallied to finish second last out in her seasonal debut in a June 28 optional-claiming sprint at Churchill.

David Cohen will pilot Risky Mandate for the first time from post 2.

Saul J. Kupferberg's Honor Way, a 6-year-old Caleb's Posse bay trained by Charlton Baker, is also in search of her first stakes win while making her 36th career start. Bred in Kentucky by Candy Meadows, the multiple stakes placed mare has compiled a record of 10-6-7 with purse earnings of $494,692.

She arrives at the Shine Again from a rallying half-length score in an optional-claiming sprint on June 14 at Belmont.

Analysis: Only 1 filly can beat Letruska in the Fleur de Lis
Only two months ago, Letruska entered the Apple Bl...