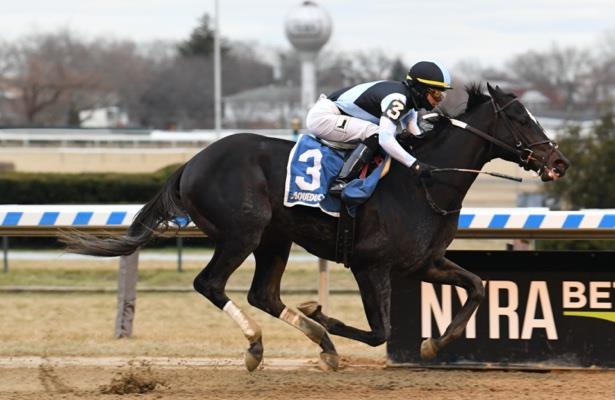 Nadal. Charlatan. Maxfield. Dennis’ Moment. The road to the 2020 Kentucky Derby tripped up some memorable horses.

But how about one that seems to have been forgotten? Independence Hall was there, too. He was the winter-book favorite for the Derby, if being shortest priced at William Hill Nevada on New Year’s Day defines that distinction.

“A lot of things were beyond our control,” said lead owner Aron Wellman of Eclipse Thoroughbred Partners. “When you win in November as a 2-year-old and early January as a 3-year-old, of course you’ve got a plan for the classics. But there’s so much that can go on even in a normal year.”

Independence Hall never made it to the Kentucky Derby — or to any race, for that matter — after he finished fifth in March in the Florida Derby.

He has been moved from New York to California, with a quiet spring and summer in between. Back on the track at Saturday for his first workout in six months, Independence Hall is taking aim at the seven-furlong Malibu Stakes (G1), the traditional feature for 3-year-olds on the Dec. 26 opening day at Santa Anita. That was where the Constitution colt went three furlongs handily in 36.4 seconds for new trainer Mike McCarthy.

“I thought he worked very well,” McCarthy said Saturday. “He’s been here a little more than two weeks. He came to us in good order.”

“We believe he’s a Grade 1 talent,” Wellman said. “We put a circle around the Malibu as our most likely opportunity to win a Grade 1 with him.”

That is a test that takes Independence Hall back to his one-turn roots. He was undefeated in three such races, including the Nashua (G3) last November and the Jerome on Jan. 1 at Aqueduct. At two turns he was second to Sole Volante in the Sam F. Davis (G3) at Tampa Bay Downs before finishing out of the money in his first Grade 1 try in the Florida Derby.

“It was just clear that he wasn’t himself, so we backed off on him,” said Wellman, who would not comment on whether there was anything physically wrong with the horse. “He just told us after the Florida Derby that it was time to take a deep breath and back off. We sent him to WinStar Farm (in Kentucky) for the spring and through the summer. He’s such an exceptional talent that we wanted to do right by him and come back hopefully guns a-blazing.”

“The horse came to us very sound,” McCarthy said. “He has not missed a beat.”

The transfer from trainer Mike Trombetta in the East to McCarthy in the West was completely a matter of geographic convenience, Wellman said, because the Malibu was the sole Grade 1 race that made the most sense.

“We’re absolutely thrilled with the manner in which Mike Trombetta trained him and cared for him,” Wellman said. “But we’re living in a peculiar time where we don’t know what travel and quarantine protocols are going to look like in the next few months. Rather than complicating the matter and risking not being able to get to Santa Anita with a horse that we want to run in the Malibu, we decided we would take that potential hiccup out of the equation and send him straight to Michael McCarthy, who is based at Santa Anita.”

Both Wellman and McCarthy said that, ideally, Independence Hall would ease back into routine workouts and then have a prep race before the Malibu. Both also said that all depends on how he reacts to a resumption of activity just two weeks off the farm.

“I just make sure the horse is healthy every day,” McCarthy said. “If he stays that way, the Malibu is certainly in the cards. It’s all dependent on him. Maybe we’ll find a little prep race for him. But if we think he needs to run in the Malibu right off the bat, that’s what we’ll do.”

The push to get Independence Hall a Grade 1 victory before 2021 might suggest that he will spend his 4-year-old season breeding rather than racing. But Wellman said it would be premature to even think that.

“I don’t think anything has been determined,” he said. “Everybody understands how important it is for horses of his caliber and talent level to win a Grade 1 as soon as possible in their careers.”

McCarthy sounded more hopeful that he will be training Independence Hall for many months after the Malibu.

“I think that by giving him a little bit of a freshener,” he said, “they made sure he was good for this winter and the start of his 4-year-old campaign.

For now, though, the focus is clearly on Dec. 26 and the cut back to a distance that provided Independence Hall the stage for his debut at Parx Racing. That is where he won by 4 3/4 lengths last September as an odds-on favorite.

“He was brilliant going seven-eighths on debut,” Wellman said. “He was more than brilliant winning the Nashua at a one-turn mile. I would say he was just as good doing so in the Jerome. He’s been exceptional around one turn in his career, and the timing is such and the Grade 1 availability is such that the seven-eighths of the Malibu could very well be his ticket.”

Wellman teased the possibility of something more next year when he said, “We’re not entirely throwing out the possibility of him running two turns again sometime in the future. We’ll see how he finishes out the year and take it step by step from there.”

Going from a Derby favorite to an almost forgotten 3-year-old to an end-of-the-year Grade 1 candidate, 2020 would have been unusual enough for Independence Hall without a pandemic being thrown in.

“It’s one of those things where a lot of horses come and go throughout the course of the spring of the 3-year-old season,” McCarthy said. “It’s unfortunate that he was not able to make it to the Kentucky Derby. It’s unfortunate what everybody in racing is experiencing this year.”

No wonder Wellman was circumspect about the future.