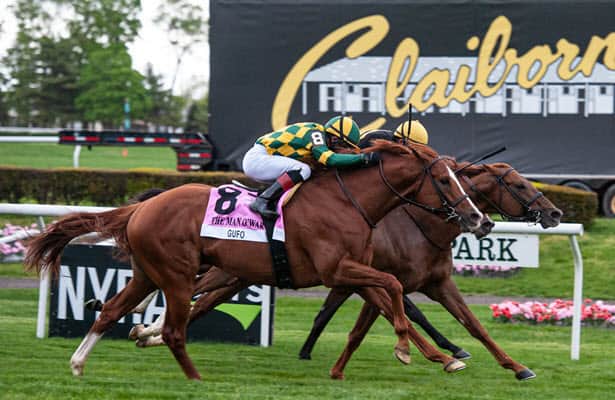 Hall of Fame jockey John Velazquez, yet again, was the best rider on the track when he won another Grade 1, this time in the $700,000 Man O’ War. Velazquez put 8-1 Channel Cat on the lead right out of the gate and led every step of the 11-furlong turf race.

Last weekend, Velazquez tallied a pair of top-level wins in the Kentucky Oaks (G1) and the Kentucky Derby (G1).

A field of eight older male turf horses went postward at Belmont Park, headed by the 3-2 favorite Gufo, who won the Belmont Derby (G1) last year; and 2-1 Sovereign who was making his U.S. debut for trainer Chad Brown. Channel Cat, on the other hand, had not won a race since July of 2019 in the Bowling Green (G2) at Saratoga.

The early fractions of 47.53, 1:12.45 were not slow for Velazquez and Channel Cat, but the pair appeared to be moving comfortably. Entering the final turn, Gufo began to make his move under another hot rider, Joel Rosario. Gufo was closing quickly and they hit the finish line together, but Channel Cat held on to by a nose. The final time for mile and three-eighths was 2:13.34.

“I didn’t think we went that fast," explained Velazquez. "I knew we were going fast, but not quite 22 (seconds) and change. I gave him loose reins and he was a happy horse up front. I was happy with the way that he was doing things. I felt [Gufo] coming when I was asking him to run.”

Channel Cat is a homebred for Calumet Farm trained by Jack Sisterson. He paid $18.40 as the fifth-longest shot on the board.

Going into the race, Sisterson worried about messing up Velazquez's winning ways.

"I didn’t sleep last night," said Sisterson. "I wasn’t nervous about Channel Cat, I was nervous about letting John Velazquez down because I didn’t want to ruin last weekend’s celebrations."

Sisterson and Channel Cat were in good hands with the Hall of Famer as the 6-year-old became a millionaire with the first Grade 1 victory of his 27-race career.