In memoriam: The equine stars that racing lost in 2021 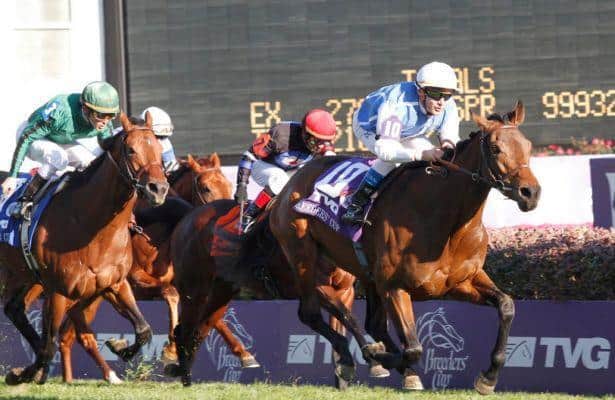 It's the season to reflect on the year that is ending, and for horse-racing fans, that reflection includes recalling the equine stars we lost.

In 2021, none was more shocking than Medina Spirit, who died in early December from an apparent heart attack after a work at Santa Anita. Bob Baffert's star 3-year-old had been mired in controversy since failing a drug test after winning the Kentucky Derby.

No list could be complete, but here are other memorable horses who died in 2021.

Albert the Great. The five-time graded-stakes winner was euthanized in November because of chronic sinus infection. He was 24. He was retired after a third-place finish in the 2001 Breeders' Cup Classic and went on to a successful stud career.

America's Joy. The unraced 3-year-old daughter of American Pharoah filly, who sold in 2019 for more than $8 million, died in August at Saratoga. She sustained a sesamoid fracture while breezing and broke her neck in a fall.

Arazi. After winning six races in a row in France, Arazi shot to stardom in the U.S. when he came from next to last to a 5-length win the 1991 Breeders' Cup Juvenile. He died in July at age 32 on the Australia farm where he lived his final years.

Bernardini. He won the 2006 Eclipse award for top 3-year-old after a six-race win streak that included the Preakness Stakes, the Travers (G1) and the Jockey Club Gold Cup (G1), and he was a leading sire after his racing career ended. Bernardini was euthanized in July at age 18 because of complications from laminitis.

Danza. The winner of the 2014 Arkansas Derby (G1), who was retired after a third-place finish in the Kentucky Derby, died in July at age 10 after an apparent heart attack.

Electric Ride. The 2-year-old broke her maiden on debut and was a contender for the Breeders' Cup Juvenile Fillies after finishing second in the Chandelier Stakes (G2). Her death at Santa Anita in October was attributed to non-musculoskeletal sudden death with anaphylactic shock.

Elmhurst. The upset winner of the 1997 Breeders' Cup Sprint died in January from heart failure at Our Mims Retirement Haven in Paris, Ky. He was 31.

English Channel. The perennial leading turf sire died in November at age 19 after a rapid decline in his health. He won multiple Grade 1 races, finishing his track career with a victory in the 2007 Breeders' Cup Turf.

Gilded Time. The winner of the 1992 Breeders' Cup Juvenile and veteran sire died in November, a month shy of his 32nd birthday, because of "the infirmities of old age."

Goldikova. The only horse to win in one division of the Breeders' Cup in three consecutive years died in January at age 16. In her only North American starts, the Ireland bred won the Mile from 2008 to 2010, finishing third in 2011 to close her racing career. For those efforts, she won two Eclipse awards and was named to the National Racing Museum and Hall of Fame in 2017.

Hogy. The fan favorite and multiple graded-stakes winner was euthanized in August at age 12 after a catastrophic ankle fracture in a paddock accident. He was retired to Old Friends Thoroughbred retirement farm in 2009 after racing until age 10.

Laoban. His only win came in the 2016 Jim Dandy (G2), but he went on to become a prominent second-crop sire. The son of Uncle Mo was standing at WinStar Farm when died unexpectedly in July at age 8.

Malibu Moon. The foundation sire of Spendthrift Farm died in May of an apparent heart attack at age 24. At the time of his death, he had sired 126 black-type winners and 51 graded winners, including 2013 Kentucky Derby winner Orb.

Owendale. The multiple graded-stakes winner died in August after suffering from colic. The son of Into Mischief was 5.

Performer. The winner of the 2019 Discovery (G3) and 2021 Fred W. Hooper (G3) died in November at age 5 after his stomach ruptured. He had been scheduled to stand at stud in 2022 for Claiborne Farm.

Rock Hard Ten. The multiple graded-stakes winner died suddenly in November at a Korean Racing Authority farm. He was 20.

Sakhee. The 2001 Prix de l’Arc de Triomphe (G1) winner and gallant foil to Tiznow in that year’s Breeders’ Cup Classic was euthanized in August at Shadwell’s Nunnery Stud because of the infirmities of old age. He was 24.

Santa Barbara. She came to the U.S. from Ireland this summer and won two Grade 1s: the Belmont Oaks Invitational and the Beverly D. She was euthanized in September after fracturing her pelvis.