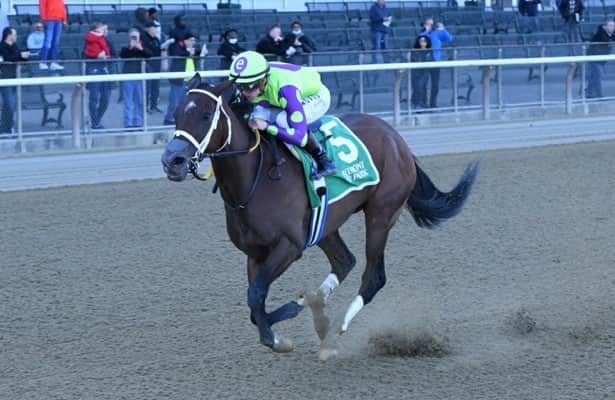 Gibberish tracked 2-5 favorite Miss Marissa in the early going, took command before the turn and finished strong to post a 3 3/4-length victory in Saturday’s Grade 3, $150,000 Turnback the Alarm for fillies and mares 3-years-old and up going 1 1/8 miles on the Belmont Park main track.

The 27th edition of the Turnback the Alarm, the first of four stakes on Belmont’s 10-race card, saw e Five Racing Thoroughbreds’ Gibberish post her first victory in nearly a year, earning her first winner’s circle appearance in six starts.

Gibberish, off at 3-1, broke from the outermost post under jockey Dylan Davis as Miss Marissa led the five-horse field through an opening quarter-mile in 23.56 seconds and 47.22 for the half over a fast track.

As rider Kendrick Carmouche kept Miss Marissa to the inside, Davis urged Gibberish up from the three-path, taking command with three-quarters in 1:12.29. Gibberish kept command entering the stretch and easily repelled So Darn Hot’s late bid, completing the course in a 1:51.93 final time for her first win since the Treasure Chest on November 27, 2020 at Delta Downs.

“I just wanted to come out running and not give an easy lead to Miss Marissa. I saw the four-horse (Firing Carol) was getting more engaged, so I was able to back off since she was doing a little more of the dirty work for me” said Davis, who rode Gibberish for the first time. “She’s a big, nice-moving filly. She got to the turn and the half-mile pole and started picking up her stride.

“I didn’t want to fight with her too much,” he added. “If you start fighting with her, she tends to back off, just looking at her replays. I let her run until the turn there and once we got in the stretch, she got her stride going even more and she was determined to get to the wire.”

Bred in Kentucky by Dell Ridge Farm, Gibberish had posted a pair of stakes runner-up in the current campaign, starting with the Lady’s Secret on June 6 at Monmouth Park before finishing 1 1/4 lengths back to Miss Marissa in the Delaware Handicap (G2) on July 10 at Delaware Park.

“We knew who the horse to beat was and we knew Gibberish can be forwardly placed,” said Sarah Shaffer, assistant to trainer Saffie Joseph Jr. “The idea was to be close to that. But if there was not much pace in front, we weren’t going to restrain our filly. We wanted her to go to the front and get into a comfortable stride. We had another horse kind of creep up in there and put the pressure on, and it set up beautifully for her.”

Shaffer said Gibberish could be ready to embark on the next phase of her career.

“I have a van set up for her to ship out to the horse sale in Lexington. She’s headed to the sale,” Shaffer said. “I think broodmare is in her future and I think she deserved it to go out with another stakes win.”