In a twist, champion Covfefe retires 'sound,' to breed in 2020 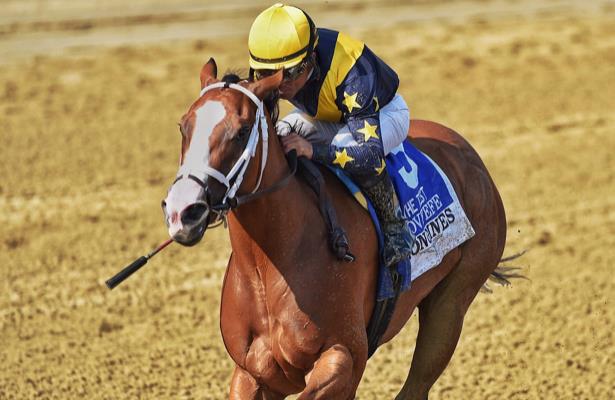 Covfefe, voted the Eclipse Award winner as top female sprinter and 3-year-old filly of 2019, won't race on after all this season.

According to an announcement Monday by her connections, the daughter of Into Mischief will breed with Constitution, whose first crop of horses are lighting up the racetrack.

That's a change in plans after Covfefe, who won the Breeders' Cup Filly & Mare Sprint in her final start, had returned to training with Brad Cox at Fair Grounds, putting in a pair of three-furlong breezes this month.

Cox, in a news release, said Covfefe is "100 percent sound." She was campaigned by LNJ Foxwoods, the ownership group consisting of Larry and Nani Roth along with their daughter, Jaime.

“As LNJ Foxwoods is primarily a breeding operation, my family has now chosen to focus on the next stage of her career,” Jaime Roth said. “She has given us some of the most incredible moments of our lives and we look forward to campaigning her offspring in the near future.

In addition to her Breeders' Cup score, Covfefe set Pimlico's track record for six furlongs by finishing the Miss Preakness (G3) in 1:07.70; won Saratoga's Test (G1) and tuned up for the championships by defeating older horses for the first time in Churchill Downs' Dogwood.

Covfefe earned just north of $1.1 million while finishing 6-0-1 in eight starts. She will now reside at Gainesway Farm in Kentucky.

“We were left in awe of Covfefe’s accomplishments as a 3-year-old," Jaime Roth said. "To be named the first dual female 3-year-old champion since Rachel Alexandra was an honor. Covfefe is the epitome of why one gets into the game and did everything we could ask for as a racehorse.”