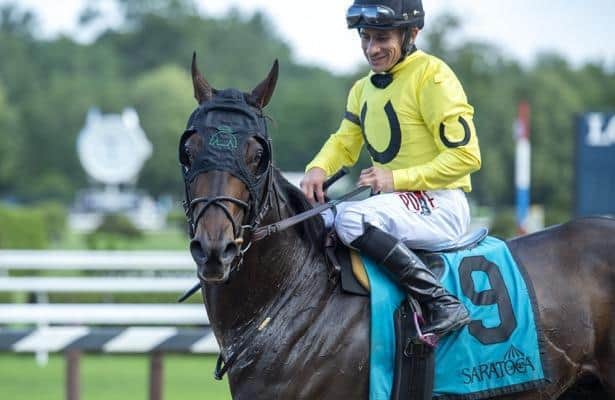 Making his first start since December, Mr Havercamp scored an upset victory Friday in the Grade 3, $150,000 Forbidden Apple at Saratoga.

The Ontario-bred gelding, a 5-year-old son of Court Vision, passed pace-setter Gidu, then held off the field to score a victory that paid $29.60. Mr Havercamp covered the one mile over Saratoga’s yielding inner turf in 1:37.50 under jockey Junior Alvarado.

"As soon as we turned for home, he gave me a nice kick and was just all out right there, trying hard," Alvarado said.

Hembree, who finished a half-length behind Mr Havercamp, edged Qurbaan for second place.

The Forbidden Apple marked Mr Havercamp’s first race since running 13th at Gulfstream Park in his final race as a 4-year-old, Dec. 15 in the Fort Lauderdale Stakes (G2).

"He runs well fresh," Day Phillips said. "This was probably a little steeper of a first race than we really wanted, but the Woodbine Mile (Grade 1, $1 million, Sept. 14) is our goal, so we're backing up and this is what brought us this weekend.

"This race was here and Saratoga is Saratoga - it's great to be here."

One more race left from the Spa, watch it now on @TVG. pic.twitter.com/w3K2ATkpRJ