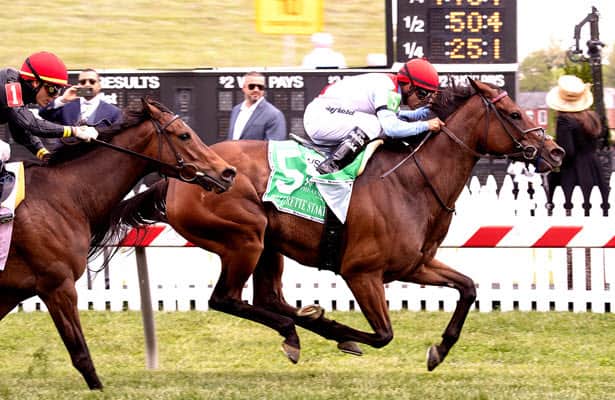 The 70th running of the 1 1/16-mile Gallorette for fillies and mares 3 and up on the grass was the third of 10 stakes, six graded, worth $2.25 million on a spectacular 14-race program headlined by the 146th running of the 146th Preakness Stakes, Middle Jewel of the Triple Crown.

Confidently handled by jockey Luis Saez, who previously won the Gallorette with Somali Lemonade in 2014, Mean Mary ($3.60) was never threatened in earning her fourth career graded-stakes victory and first since the 2020 New York (G2) which capped a four-race win streak.

“It was perfect. I couldn’t have asked for anything else, really,” trainer Graham Motion said after the race. “I didn’t know that they would let her go that easy on the lead. My main concern was that she was settled, that she was relaxed.”

Mean Mary broke alertly and quickly established command up front, cruising uncontested through a quarter-mile in 25.27 seconds and a half in 50.92. Flighty Lady, Group 1-placed in France and making her second U.S. start, trailed in second with Feel Glorious third. The top three remained unchanged after six furlongs went in 1:15.29, when Saez gave Mean Mary her cue and she began to open up on her rivals.

Tropical Park Oaks winner Vigilantes Way made a belated run on the outside to get second, a length ahead of Great Island. Flighty Lady and Feel Glorious completed the order of finish. Mean Mary’s stablemate, Tuned, was scratched.

Mean Mary made her career debut at Laurel Park in September 2019, finishing fifth, but hadn’t raced in Maryland since. She was first or second in seven consecutive races, including wins in the 2020 La Prevoyante (G3), Orchid (G3) and New York in succession, before coming up a neck shy of Rushing Fall in the Diana (G1) at Saratoga. Rushing Fall would go on to be named last year’s female turf champion.

Gallorette retired in 1948 as the world’s leading money-winning mare, with earnings of $445,535. She won 21 of 72 starts and placed in 39 stakes, capturing the 1945 Pimlico Oaks and being named champion handicap mare of 1946. She was elected to the National Museum of Racing’s Hall of Fame in 1962.