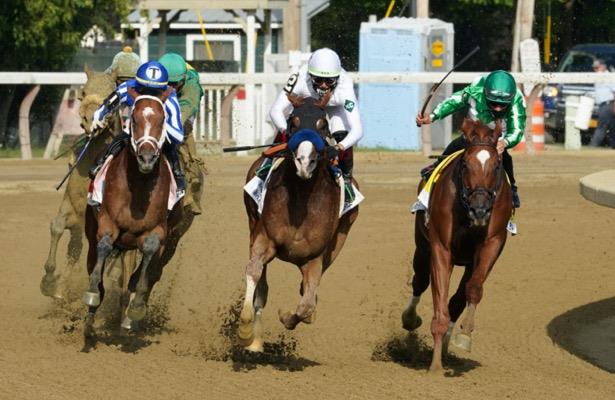 After a stumble cost favorite Tom’s d’Etat at the start of Saratoga’s Grade 1, $750,000 Whitney, Improbable was the one who took advantage.

Improbable gave trainer Bob Baffert a second straight Whitney victory Saturday, taking over through the far turn under jockey Irad Ortiz Jr. and driving on to a two-length win over By My Standards. Tom’s d’Etat settled for third with Code of Honor finishing fourth.

“Big race, big race,” said Elliott Walden of owner WinStar Farm. “… He broke great, Irad had him in a super position and we felt great all the way around there. Bob had him ready to go, as usual when he comes East.”

The 4-year-old City Zip colt Improbable failed to win any of his six graded stakes starts in 2019 and started 2020 with a runner-up finish to Tom’s d’Etat on April 11 in the Oaklawn Mile Stakes. A return to home turf June 6 brought a victory in Santa Anita Park’s Hollywood Gold Cup Stakes (G1).

Improbable shipped East to the Spa off the momentum of that Grade 1 victory and added another in the Whitney. The 3-1 third betting choice gave Baffert his second Whitney triumph, the other coming last year thanks to stablemate McKinzie.

“He’s just a different horse this year,” Walden said of Improbable. “That’s his second Grade 1 in a row. He got beat by Tom’s d’Etat in his first start at Oaklawn, but he’s set up for a big year and we’re just excited to continue that.”

In a compact field of five millionaires, 29-1 shot Mr. Buff broke to the front and set patient fractions of :25.12 and :49.74. Improbable, By My Standards and Code of Honor followed in that order, while Tom’s d’Etat and jockey Joel Rosario sat last after his rough start.

"He stumbled coming out--there was a lot going on," Rosario said. "He was standing fine, he just missed the break. The horse to the inside of him was moving a little bit, he was straight, he just stumbled a little bit. It changed my plan because I had to really get riding from there. I couldn't take my time."

Improbable pulled alongside pace setter Mr. Buff coming through the second turn, and easily moved by him. Ortiz had his mount in a hand ride most of the way, as Improbable made the 1 1/8 miles in 1:48.65 for a victory that returned $8.50.

Ortiz Jr.'s only previous ride aboard Improbable came in last year's Kentucky Derby, where they checked in fifth as the lukewarm 4-1 favorite.

"Finally, he's grown up a little bit," Ortiz Jr. said. "He turned into a nice horse. Mr. Baffert did a great job with him. He broke really good today. Honestly, I just took a little hold...Thank God everything broke well. We had a beautiful trip."

CHC Inc. and SF Racing campaign the Kentucky-bred Improbable alongside WinStar Farm. He improved to 13: 6-3-0 with half those six wins coming in Grade 1 flight.