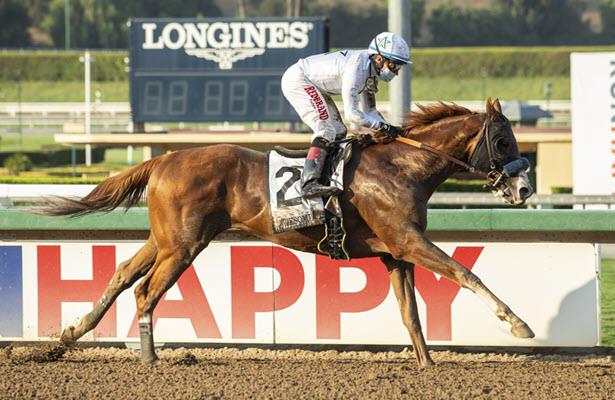 What was billed as a two-horse race between top-class stablemates Maximum Security and Improbable turned into a one horse tour-de-force Saturday, as Improbable launched from dead last and drew off in the stretch to earn a third straight Grade 1 victory, this time by 4 1/2 lengths in the $300,000 Awesome Again Stakes at Santa Anita Park.

Improbable and jockey Drayden Van Dyke broke last in the five-horse field and stayed there as 50-1 shot Take The One O One took the field through fractions of 23.33 and 46.36 seconds with odds-on favorite Maximum Security up close stalking the pace under Luis Saez. Improbable started his bid on the second turn and quickly circled the field to grab the lead after six furlongs in 1:09.79.

Maximum Security, who seemed to be toiling some on the second turn, briefly tried to engage his stablemate as they reached the quarter pole. But there was no beating Improbable on this day. He opened his lead down the stretch before being geared down late to score in impressive fashion in a final time of 1:49.01.

"I knew I was coming in here with two really good horses," trainer Bob Baffert told TVG. "Maximum Security, he was up in that scrum, they were really running up close. Drayden knew what was happening and he sat back. He rode a great race, he knew what was going on there. He's had good luck with this horse."

Maximum Security finished second and was followed by Midcourt and Take The One O One. Improbable paid $5.60 as the second choice.

In awe of IMPROBABLE & @DraydenV's performance in the G1 Awesome Again Stakes @SantaAnitaPark! We will see you in the starting gate for the @BreedersCup Classic at @KeenelandRacing!#WinAndYoureIN @LanesEndFarms pic.twitter.com/6R9MOOwThI

Van Dyke noted it was again a team effort again with Improbable, who has had a number of starting gate issues in his career.

“The gate guy did a fabulous job with him, holding him still, he got out clean," Van Dyke said of last year's Kentucky Derby favorite. "I was going to see what everyone else was gonna do, and they did what they did and I did what I did and it worked out good.

"He showed a different tactic today which he showed before when he was two," Van Dyke added. "He used to come off the pace more than usual."

Improbable entered the Awesome Again following wins in the Hollywood Gold Cup (G1) at Santa Anita and the Whitney (G1) at Saratoga when shipped east. He upped his record to 14: 7-3-0 with more than $1.6 million in earnings.

The victory moved Improbable to the futures betting favorite in Europe for the Breeders' Cup Classic. According to Oddschecker.com, he was cut from 12-1 to a best price of 4-1.

As for Maximum Security, Saez noted he put in a good effort despite difficult circumstances.

“There was a lot of pressure along the way and he couldn’t get comfortable, but that’s how these races go,” said Saez.  “You win sometimes and don’t others.  The good thing is he pulled up pretty good, so let’s see how next time goes.  He was fighting at the end of the race, but we lost.”