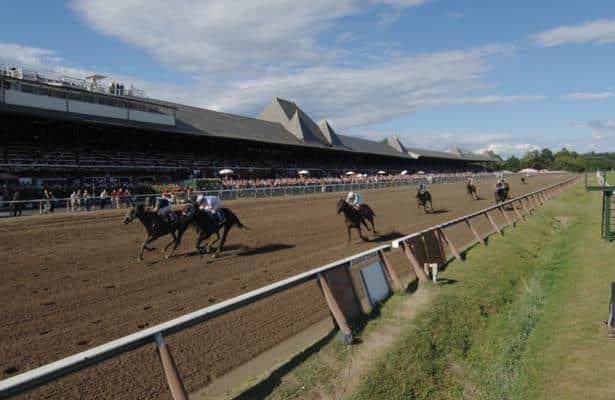 Hall of Fame trainer D. Wayne Lukas will be in search of a record-extending seventh triumph in the Grade 3, $200,000 Adirondack when he saddles maiden winner Naughty Gal for her stakes debut in Sunday's 6 1/2-furlong sprint for juvenile fillies at Saratoga.

A daughter of Into Mischief, Naughty Gal was an eye-catching winner of a July 4 maiden special weight at Churchill Downs, where she battled for the lead for the first half-mile in the six-furlong sprint and then easily took control to skip away to a 9 1/4-length score under Rafael Bejarano. The effort earned her a field-high 75 Beyer Speed Figure.

Owned by Holy Cow Stable, Naughty Gal has had three works at Saratoga since the middle of July, most recently drilling a half-mile from the gate in 49.93 seconds over the Oklahoma training track on July 31.

Lukas said he has had the Adirondack in mind for Naughty Gal for some time.

“She’s doing fine. She broke her maiden by a lot, so she’ll get some attention,” said Lukas. “She has targeted this race from the beginning.”

Lukas’s Adirondack accolades date back to the 1980s, when the veteran horseman captured four straight editions of the race from 1985 to 1988, including with eventual champion Sacahuista in 1986.

Luis Saez picks up the mount from post 2 as Naughty Gal looks to give her owners their first stakes win.

Gary Barber’s Janis Joplin might still be a maiden, but she enters the Adirondack as the lone entrant with a graded placing on her resume. Trained by Hall of Famer Mark Casse, Janis Joplin was a closing third last out in the Schuylerville (G3) on July 14 at Saratoga.

Janis Joplin has been away slow from the gate in both her debut when third in a June 29 maiden at Churchill Downs and the Schuylerville, something Casse said will get better with experience.

“It's a greenness thing. When I ran her at Churchill, she was probably a couple works short of running, but we were getting towards the end of the meet,” Casse said. “If I didn't run her there then I'd have to run her as a first-time starter at Saratoga, and I just felt like she'd trained enough to run decent and she actually ran better than I expected.”

The daughter of California Chrome was able to improve position in the Schuylerville after Summer Promise and subsequent winner Just Cindy set strong fractions up front.

“We knew there was a fair amount of speed in the Schuylerville and closers often do well in that race, so we put her in there hoping for a decent effort and she did,” said Casse. “She now has something very few horses have and that is Saratoga graded black type.”

Janis Joplin breezed a half-mile in 49.11 seconds on July 30 over the main track. Casse said he expects another good showing from the bay filly as she stretches out another half-furlong from the Schuylerville.

“She worked really well. Our feeling has always been the farther they go the better, so she gets another half furlong,” said Casse.

Flavien Prat is tasked with the ride again from post 5.

A dark bay Connect filly, Apple Picker led every step of the way in the 5 1/2-furlong event under Hall of Famer John Velazquez and maintained a one-length advantage over her six rivals before she opened up down the stretch and notched a four-length victory. The effort garnered a 61 Beyer.

"I really like how she's progressed since Day One,” Rodriguez said. “Every time she goes to the track, she seems more mature. She's learning more about the game. She's a very smart filly. Johnny breezed her a couple times and he really likes her and is familiar with the filly.”

Apple Picker put in a half-mile work Thursday over the main track in 51.66 seconds, the latest of four breezes at the Spa since moving up from Belmont Park in early July.

"She's been training very good. Sometimes she gets a little spooky, but she's been very, very happy in Saratoga,” Rodriguez said. “We just breezed a half-mile nice and easy. She went very nice and we'll see what the competition is."

J S Stables’ Promise of Hope, the other debut winner in the field, won her first outing by 3 1/2 lengths for trainer Tom Amoss in a maiden special weight on July 1 at Churchill. A bay Ghostzapper filly, Promise of Hope took charge of the field of eight just past the first quarter-mile and never looked back, completing the five furlongs in 58.18 seconds.

“She ran a good race when she won first out at Churchill, but it’s a graded stake at Saratoga so that’s a big step forward,” said Amoss.

Amoss said he is excited to see what’s next with Promise of Hope, who is a full sister to graded stakes-placed Gal in a Rush.

“She’s a promising young filly and I really think Saratoga is a great testing ground to see where you stand early on in these horses’ careers and how to move forward with them,” Amoss said.

Promise of Hope will emerge from post 3 with Jose Ortiz in the irons.

Completing the field are the Dallas Stewart-trained Sabra Tuff (post 4, Irad Ortiz, Jr.), who finished second in the Debutante behind the well regarded Wonder Wheel, and maiden winner Damaso (post 6, Junior Alvarado), who was last seen finishing third in the My Dear over synthetic at Woodbine Racetrack for conditioner Timothy Hamm.