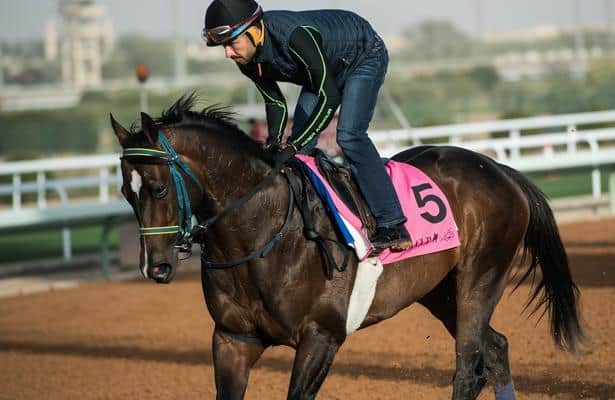 U.S.-based runners Imperial Hint and Captain Scotty will take on 11 rivals when aiming for the most lucrative scores of their respective careers in the $1.5 million Saudia Sprint going six furlongs Saturday at King Abdulaziz Racetrack in Riyadh.

Multiple Grade 1 winner Imperial Hint seems well-drawn in post No. 10, while Captain Scotty --  who earned his first stakes win in last month’s Palos Verdes (G2) at Santa Anita -- will break from the inner-half of field in stall No. 5 with jockey Joel Rosario up.

Owned by Raymond Mamone and trained by Luis Carvajal Jr., Imperial Hint will be making his 7-year-old debut in the Saudia Sprint. The son of Imperialism tallied a pair of Grade 1 wins in New York again last season when taking down both the Alfred G. Vanderbilt and Vosburgh for the second year in a row. After a veterinarian scratched him from the Breeders’ Cup Sprint -- Carvajal Jr. protested that decision -- Imperial Hint closed out the season with a third-place finish in the Mr. Prospector (G3) at Gulfstream on Dec. 12.

Captain Scotty, a 6-year-old gelding by Quality Road, missed the majority of 2019 before finally returning from an eight-month layoff on Nov. 28 to run third in an allowance at Churchill Downs for trainer Peter Miller. Subsequently sent to join Miller’s string at Santa Anita, Captain Scotty was fifth in the Joe Hernandez (G2) on Jan. 1 prior to earning his first graded stakes tally while racing on the front-end in the Palos Verdes.

Captain Scotty has a career mark of 13: 4-4-2 with earnings of $321,095 for owners Wachtel Stable and Gary Barber. He'll have Luis Saez in the saddle.

Also entered is New York Central, who was a graded stakes winner domestically while in the Steve Asmussen barn. The 5-year-old horse by Tapit was purchased last fall by Saudi Arabian interests after running fifth in the Nov. 2 Bet on Sunshine Stakes at Churchill Downs.

The chief international rivals appear to be Japan-based Matera Sky, who U.S. racing fans may remember from last year’s Breeders’ Cup Sprint, and Gladiator King, who campaigned in America as an oft-raced 3-year-old of 2019.

Matera Sky has not started since finishing dead last in the Breeders’ Cup Sprint at odds of 33-1. The chart notes for that race read “chased 3-wide, stopped.” Gladiator King enters in top form having just rattled off consecutive Group 3 wins at Meydan Race Course for new trainer Satish Seemar.

Post time for the Saudia Sprint is approximately 11:50 a.m. ET as it heads to post one race before the $20 million Saudi Cup. TVG is expected televise Saturday's undercard before coverage moves to Fox Sports 1 for the feature.