Can Kentucky Downs surprise do it again in Breeders' Cup? 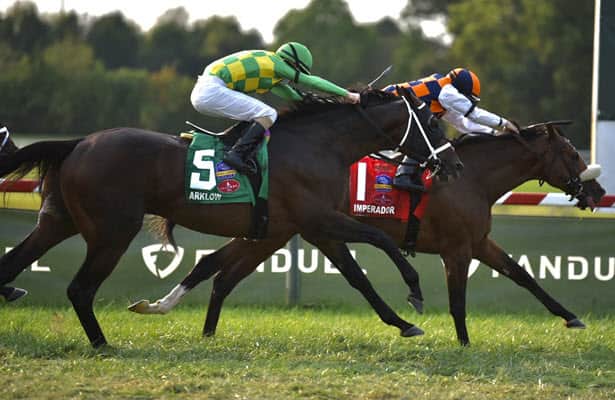 When Imperador came to the U.S. last year after finding success running in Argentina, trainer Paulo Lobo had high hopes for him.

“He had a very good campaign over there in Argentina,” Lobo told Horse Racing Nation. “He has won and run a lot of Grade 1s over there. You always expect that they can improve here.”

It took the 5-year-old Argentine-bred Treasure Beach horse some time to find his best form racing in the U.S. After a second-place finish in a Churchill Downs allowance race last September, he made his U.S. stakes debut in the Seabiscuit Handicap (G2) in November at Del Mar.

He finished ninth, flattening through the late stages of the race.

For the 2021 season, Imperador regrouped, starting with another allowance race and finishing fourth at Keeneland before trying the Louisville (G3) at Churchill Downs on May 15.

“It was my fault that day,” Lobo said. “I asked Talamo to put him a little closer to the pace that day.”

After the Louisville, the next stop was the United Nations (G1) at Monmouth Park. For that race, Lobo instead had Talamo hang farther back and come running late, resulting in a strong second-place finish.

He was referring to the Calumet Turf Cup (G2) at Kentucky Downs on Sept. 11. In that one, things finally all came together for the horse.

Once again under Talamo, Imperador sat in eighth place for much of the race before making his way to the front of the pack toward the beginning of the stretch. From there, he held off favored Arklow, who suffered from an unlucky trip, to win the race, his first U.S. victory.

After the race, which earned Imperador a fees-paid berth in the Breeders’ Cup Turf on Nov. 6 at Del Mar, Lobo announced the horse would train straight through to that race. He said he never considered trying to squeeze in another prep race after the 1 1/2-mile trip.

Lobo said the horse exited the Calumet Turf Cup in good order and will return to the work tab either this weekend or next. Talamo once again will have the ride in the Breeders’ Cup Turf.

Lobo said he hoped to see a trip similar to the one at Kentucky Downs from Imperador, in what will be the biggest race of his career.

“I don’t know who is going to be in that race, but I think we don’t have to change,” Lobo said. “Del Mar has a good race track to come from behind. He can be in the middle of the pack and make a run, and it’s going to be more what Joe wants to do with the horse.”