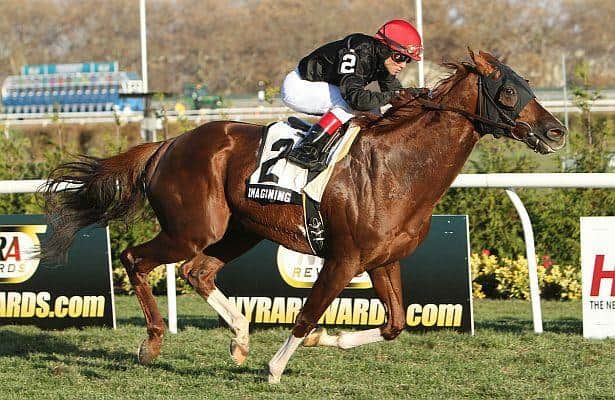 Closing with a flourish from the outside, Imagining grabbed the lead in midstretch and held on for a half-length triumph over Hangover Kid in the Grade 3, $250,000 Red Smith Handicap on Saturday at Aqueduct Racetrack, giving Hall of Fame trainer Shug McGaughey his third consecutive win in the 1 3/8-mile race.

Off a step slowly, the usually speedy Imagining was allowed to settle in midpack, well off the rail, behind long shot Mission Approved, who towed the field of 12 through a half-mile in 50.92 seconds and a mile in 1:41.63 over the firm turf course. Given his cue by jockey Joel Rosario on the far turn, Imagining kicked into high gear to take command with a little more than a furlong to go and hold off a late charge from the runner-up.

"I thought he'd be racing on the lead or in second, but he broke a little slowly and I had to race behind horses," said Rosario. "They weren't going all that fast, and we were able to move up. I asked him turning for home, and he gave it to me."

Imagining, who had sandwiched front-running victories in the Bowl Game overnight stakes at Belmont Park on October 17 and the restricted Idle Rich stakes at Saratoga Race Course around a sixth-place finish in the Grade 1 Joe Hirsch Turf Classic Invitational, completed the 11 furlongs in 2:18.43.

"[Joel] let him settle in and get to the outside, which is where he wanted to be," said McGaughey who won the 2011 and 2012 Red Smiths with Boisterous. "I was glad to see that; I said to myself when they were going down the backside, 'I hope he punches from here' because it would be something different for him. It was a pretty good bunch of horses; I think we're moving on up."

The victory was the first in a graded stakes for the 5-year-old son of Giant's Causeway, who has now won three of his past four starts. Sent off as the 7-2 second choice, he returned $8.30 for a $2 win bet and earned $150,000 for the Phipps Stable.

The fast-closing filly Tannery finished third, a nose behind Hangover Kid and 1 ¾ lengths ahead of 94-1 shot Slip and Drive. Hyper, the 3-2 favorite, never challenged and finished eighth.