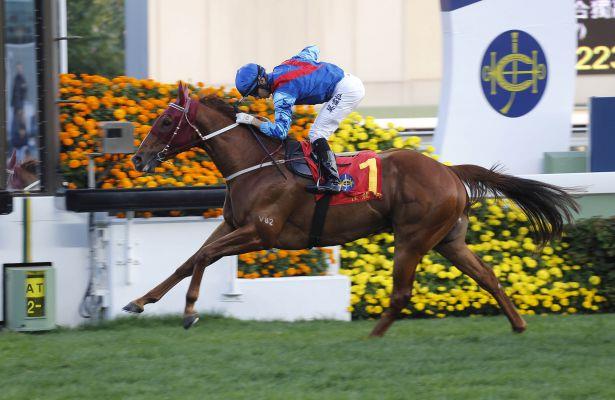 Rapper Dragon claimed the Hong Kong Horse of the Year award at a sparkling ceremony held at the Grand Hyatt tonight, Friday 14 July. Hong Kong’s standout four-year-old made history during the season when he became the first horse to win all three legs of Hong Kong’s Four-Year-Old Classic Series.

“This is a really classy animal,” Moore said after the Derby victory. “I’ll call him my champion because he’s won me a Derby.”

Rapper Dragon was also named the Champion Middle-distance Horse, based on his brilliant performances in the Hong Kong Classic Cup and the BMW Hong Kong Derby. The ascendant chestnut then impressed again when taking on a group of proven elders in the G2 Chairman’s Trophy (1600m) to land his second Group race win in his career, having won the G3 Lion Rock Trophy as a three-year-old during his first season in Hong Kong.

Meanwhile, Rapper Dragon also secured 57.5% of the public vote to claim the Most Popular Horse title.

Beauty Only was named the season’s Champion Miler. The Tony Cruz-trained six-year-old won two of his nine starts, including the G1 LONGINES Hong Kong Mile and the G2 BOCHK Wealth Management Jockey Club Mile. The Holy Roman Emperor gelding performed consistently throughout the season, finishing second on three occasions, including in the G1 Champions Mile, the G2 Chairman’s Trophy (1600m) and the G3 Celebration Cup (1400m). At his latest outing he finished a creditable sixth in the G1 Yasuda Kinen in Japan.

The Champion Sprinter award went to the retired Aerovelocity, who also won this award in the 2014/15 season. The Pins gelding is rated as one of the toughest horses ever to have competed on the Hong Kong circuit. Aerovelocity started this season with two encouraging runs, finishing third in both the G2 Premier Bowl (1200m) and the G2 BOCHK Wealth ManagementJockey Club Sprint (1200m), and then bounced back for a second triumph in the 2016 edition of the G1 LONGINES Hong Kong Sprint (1200m). He remains the only locally-trained horse to have won G1 races in three different jurisdictions.

2015/16 Hong Kong Horse of the Year Werther claimed the Champion Stayer title this season. The John Moore-trained stalwart won the G1 Standard Chartered Champions & Chater Cup, one of only three mile-and-a-half races staged in Hong Kong, to seal the award.

Premiere, a three-year-old from the John Size stable with three eye-catching wins from 12 starts, claimed the Champion Griffin Award.

The season’s Most Popular Jockey and the winner of the Tony Cruz Award will be revealed during racing at Sunday’s (16 July) season finale at Sha Tin. Most Improved Horse of the Year will also be awarded on that day.

The recently-retired champions Able Friend and Aerovelocity were honoured with Lifetime Achievement Awards in recognition of their great contributions to Hong Kong racing.

The Champion Awards Judging Panel announced the winners for the 2016/17 season during this evening’s presentation ceremony as follows: