If Churchill requires quarantine, will jockeys skip the Derby? 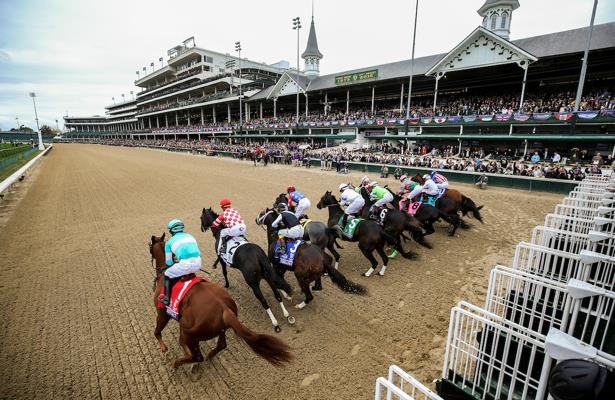 Could jockeys expecting to take part in the Kentucky Derby (G1) be forced by new pandemic rules to choose between the two-minute ride of a lifetime and weeks of sometimes lucrative races in California and New York?

That question is being asked by agents who are bracing to hear Monday that jockeys might have to be isolated in Louisville for 10 days before riding on the Oaks and Derby cards Sept. 4 and 5. Then they would face further quarantine when they went back to their home bases.

“I’ve been hearing about that for a couple weeks,” said Derek Lawson, the agent for 2019 Derby-winning rider Flavien Prat. “Leaving 10 days early to ride the Derby and not being able to come back the last two days (at Del Mar), how much are we going to have to sacrifice? We’re riding a card almost every single day.”

Officials and spokesmen at Churchill Downs could not be reached Sunday. Several agents and jockeys shared a text with HRN that they received during the weekend informing them of a “(CD Virtual Town Hall Meeting) To be held on Aug. 3rd at 1PM EST. Topics include med withdrawals and Derby protocols.”

RELATED: Who's in, out and on the Derby points bubble

The threat of a 10-day quarantine was apparently discussed among Kentucky-based jockeys last month. Whether that was based on reliable information or just old-fashioned gossip was not entirely clear. But the conversation was ramped up Sunday morning after Lawson appeared on the “Thoroughbred Los Angeles” radio show.

Asked whether he would endure 10 days of isolation before trying for a third Derby victory, jockey Mike Smith texted, “Wow, I hope not. We will just have to see what they make us do.”

If the talked-about rules are indeed introduced, Smith could lose rides in the Del Mar Debutante (G1) and Del Mar Futurity (G1) and as many as three other graded stakes if he went to Louisville next month.

High-profile jockeys based this summer at Saratoga said they have not been formally told of any tightening of regulations in Kentucky.

Both Velázquez and Castellano would have to go into two weeks of quarantine on their return to New York if they were to leave for Kentucky or, for that matter, anywhere else. That would take them off any rides they might have the last two days of Saratoga – including the Spinaway (G1) and Hopeful (G1) stakes – and next month’s start of the fall meet at Belmont Park. If they had to be idled before the Oaks and Derby, they could not take part in as many as seven graded stakes at Saratoga the preceding week, including the Forego (G1) and Sword Dancer (G1).

“I know there’s a couple top riders that if they have to submit that protocol for 10 days prior to the Derby that I think they may back out,” said Matt Muzikar, agent for Tyler Gaffalione and Chris Landeros. “There’s some big races that are going to go on at Saratoga during that quarantine.”

Concerns about the spread of the coronavirus heightened last month. That was when Del Mar was forced to postpone three days of races after at least 15 jockeys and seven track workers were reported to have tested positive. That led to a tightening of the rules at Del Mar and the ban on jockeys arriving at or returning to Saratoga without first having two weeks of isolation.

Asked whether his clients – Velázquez and Joel Rosario – would sacrifice their regular schedule to go to Churchill Downs, Ron Anderson texted, “No idea. We will cross this bridge when we come to it.”

Lawson told HRN that he is holding out hope that Churchill Downs introduces something that is more lenient.

“Maybe we’ll find out tomorrow that they let us just come in with a negative test,” he said. “You just come in and ride, they’ll find a special spot for you to stay in, and you go through the two days of racing there. But I’m not certain. Everything is so up in the air right now.”