Idol will miss Breeders' Cup Classic, plus 4 other withdrawals 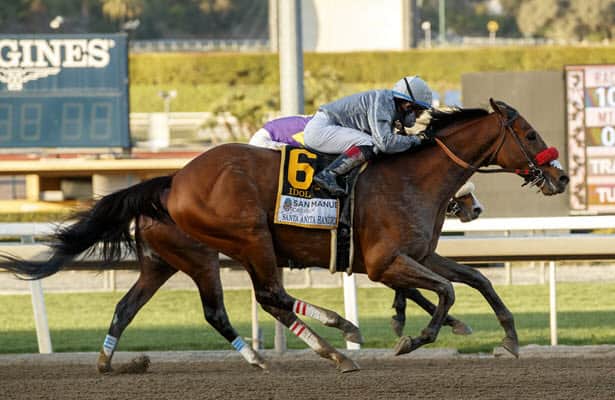 Idol is out of the Breeders' Cup Classic after trainer Richard Baltas was not happy with the way he came out of a morning workout at Del Mar.

Baltas told Horse Racing Nation in a text message Sunday that the 4-year-old son of Curlin is "OK but not 100 percent." The news initially was reported by Jay Privman of the Daily Racing Form in a Twitter post.

Idol won this year's Santa Anita Handicap (G1) but finished sixth last out in the Awesome Again. That was his first off-the-board finish in seven career starts. He worked five furlongs Sunday in 1:02.4.

Flagstaff was withdrawn Sunday from the Breeders' Cup Sprint and will be retired, according to a Twitter post by Christina Blacker of TVG. The 7-year-old gelding, trained by John Sadler, had a career record of 22: 7-7-4 and earnings of nearly $1.1 million. His last win came in the Churchill Downs Stakes (G1) on the Kentucky Derby undercard.

McPeek also confirmed Reina de Mollendo will miss the Filly & Mare Turf. Calling her a "lovely filly," McPeek said in a separate text that "she was off her feed. We decided she wasn't totally ready for Breeders' Cup."

The Reina de Mollendo news was reported first by DRF's David Grening, who posted on Saturday that Nest would miss the Breeders' Cup Juvenile Fillies. Todd Pletcher's Curlin filly has raced once, winning a 1 1/16-mile maiden special weight at Saratoga by five lengths in September.