Identifier runs down Bodexpress at 60-1 in Gulfstream's Hal's Hope 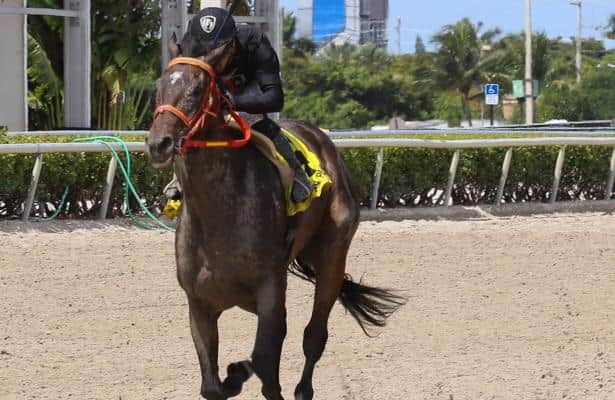 Off as the longest shot in the field, Identifier took advantage of a quick pace and closed late for a 60-1 shocker in Gulfstream Park’s Grade 3, $100,000 Hal’s Hope Stakes.

The 4-year-old son of Creative Cause entered the day with only one stakes start to his name, a fifth-place run last June in Monmouth Park’s Pegasus – the race in which King For a Day upset Maximum Security. Identifier entered the Hal’s Hope off an allowance optional claiming win Feb. 1 at Gulfstream.

Rare Form went to the front from post No. 10 in the Hal’s Hope, a 1 1/8-mile trip for older horses on the main track. The 2-1 favorite Bodexpress came up to challenge the pace setter through an opening half-mile in 47 1/5 seconds.

Bodexpress took over the lead in the far turn and was out by five lengths entering the stretch, but the snappy pace seemed to take its toll. Meanwhile Identifier came home in the center of the track under jockey Marcos Meneses, working his way around Just Whistle to nab his first stakes score.

It also marked the first graded stakes win in North America for both jockey Marcos Meneses and trainer Oscar Gonzalez. Meneses rode more than 500 winners, including 2012 Clasico Simon Bolivar (G1) victor Comediante, in Venezuela before venturing to the U.S. in 2015. Gonzalez saddled Guasca to victory in the 2012 Copa Dama del Caribe (G1), also in Venezuela.

“I’m very grateful to Mr. Gonzalez and I’m very happy for the horse. He’s a good horse,” Meneses said. “Last time there were only a few horses in the race. This race today had a lot of speed. I just waited and waited all the way. I began my race from the three-eighths pole. The horse was perfect.”

Meneses is represented by agent Roger Velez, a former jockey who rode Hal’s Hope to victories in the 2000 Holy Bull (G3) and Florida Derby (G1) and 2002 Crème Freche (G3) and Gulfstream Park Handicap (G1). The Crème Freche was renamed for Hal’s Hope in 2003.

“It was very special to me,” Velez said. “That was my horse.”

Behind Identifier, Just Whistle, another big price at 24-1, stayed up to finish an exacta that returned $1,057.30 on a $1 ticket. Bodexpress – who infamously threw his rider out of the gates of the 2019 Preakness Stakes – was third as he still seeks his first stakes win.