Iavarone back in the game with Pegasus Turf contender Next Shares 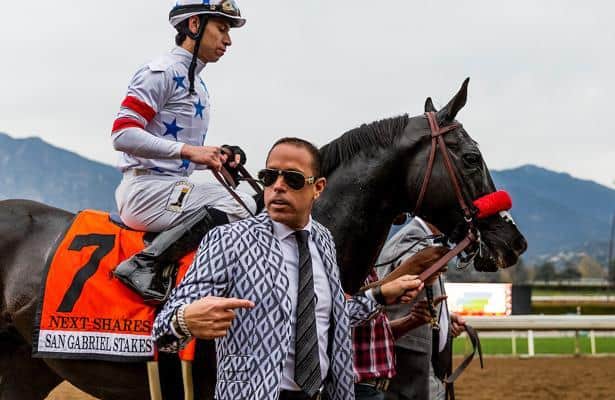 After watching a Santa Anita turf stakes on New Year’s Day of 2018, Michael Iavarone got the itch again. And he’s soothed it in a big way with the purchase of Next Shares, who will start in the inaugural running of the Grade 1, $7 million Pegasus World Cup Turf Invitational on Saturday at Gulfstream Park.

One of the principals of the IEAH Stables syndicate that campaigned 2008 Kentucky Derby and Preakness winner Big Brown and a slew of other Grade 1 winners, Iavarone was out of the horse ownership for five years following IEAH’s financial implosion. He was dabbling into re-entry when he saw a horse close from well back to finish second in a $100,000 stakes over Santa Anita’s downhill turf course.

Iavarone immediately called his friend, Nick Sallusto, the bloodstock agent who helped IEAH buy many of its stars, including Big Brown. With Next Shares a 6-year-old gelding with no breeding future, Iavarone was simply looking for a good racehorse. His owners had the same idea, having just purchased Next Shares for $190,000 at Keeneland’s 2017 November sale after the horse had won an Aqueduct allowance race.

“He hadn’t run in a while, and I saw he’d changed ownership and trainers,” Iavarone said. “This horse is kind of a big heavy horse. He closed just unbelievably fast, ran some really fast fractions. I said ‘Wow, this horse is really eager. I think if they can get this horse to go a little more ground that they’ve got something.’”

Iavarone and his wife, Jules, bought 50-percent interest in Next Shares last March not long after the horse finished a close second in Santa Anita’s Frank E. Kilroe Mile (G1).

“He’d been telling me for a little while he was itchy,” Sallusto said of Iavarone. “He was out one afternoon watching and betting the races and he spotted the horse and got the itch. He’d done that a few times prior to this horse, and this was the first one I really thought made sense.”

While Next Shares wasn’t winning for his new owners, he was running well, an exception being a 12th-place finish over speed-favoring turf after drawing post 12 in the Aug. 19 Del Mar Mile (G2).

Trainer Richard Baltas thought Next Shares preferred to have a little more give in the turf than he generally got in California. They pointed for Kentucky Downs’ $250,000 Old Friends Stakes for horses that hadn’t won a stakes in 2018. Next Shares won with authority, then did the same a month later in Keeneland’s $1 million Shadwell Turf Mile (G1). That triumph gave him a free roll in the Breeders’ Cup Mile (G1). Stuck down on the inside over giving turf, he faded to 13th but lost by only a total of six lengths.

Next Shares rebounded off a two-month layoff in taking Santa Anita’s San Gabriel (G2) by nose on Jan. 5 under pick-up rider Geovanni Franco. Gulfstream standout Tyler Gaffalione, his Keeneland and Breeders’ Cup rider, will be aboard for the 1 3/16-mile Pegasus Turf.

“I think he got confidence,” Iavarone said of Next Share’s 3-for-4 streak. “On paper, he looked overwhelmed in the Shadwell, and then he just dominated the race. That was the game-changer.…. I kind of earmarked this race after he won the Shadwell. We were using the San Gabriel as a prep after being off two months after the Breeders’ Cup.”

Said Baltas: “Maybe knowing he’s not a bridesmaid anymore, he sure acts the part. Sometimes horses just get happy and they run better. That’s my job.… We were unfortunate in the Breeders’ Cup, I thought, because of the rains. He got stuck behind horses and was kind of spinning his wheels - and it was a pretty good horse that won the race. He won the other day here, ran a very big number going against a slow pace. He just keeps getting better.”

Baltas said his main concern heading into the Pegasus Turf is running off a three-week turnaround following a big effort in the San Gabriel.

“I was just sitting on the sideline waiting for the opportunity,” he said. “Things were going really well in the investment world, so I said, ‘You know what? I’ve always loved horse racing; it’s always been a passion of my mine. My wife loves it too. We’re definitely going to expand on it.

“It really isn’t about the money. Unfortunately when you do a syndicate, it becomes that. But for me, it’s always been about the pageantry, having a good horse in the right spot,” he added. “We love the horses.”