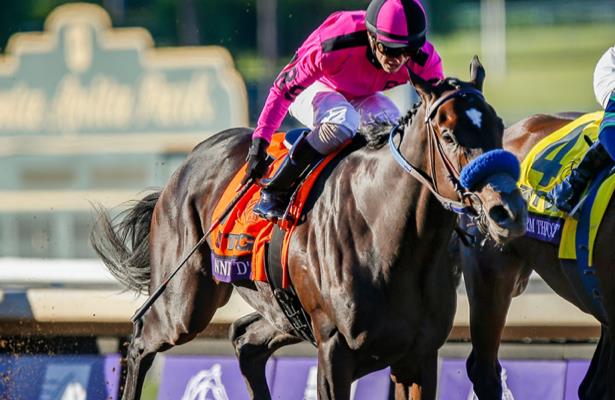 Anneau d'Or stands at No. 18 on the 2020 Kentucky Derby points leaderboard despite having not won a race this year.

But as Derby points races wind down to a precious few, trainer Blaine Wright knows that a strong showing in Sunday's Ellis Park Derby should be enough for Peter Redekop's colt to make a run for the roses on Sept. 5. The race offers points on a 50-20-10-5 basis to the top four finishers.

“I’m assuming that we have to run first or second," Wright said Wednesday. "And we probably can’t see any new shooters, you know, jump up and run first or second, because obviously that bounces us. Right now, I’m just worried about running a good enough race and trying to get there for Mr. Redekop."

The son of Medaglia d’Oro broke his maiden last September at Golden Gate and finished out the year with second-place finishes in the Breeders’ Cup Juvenile and the Los Alamitos Futurity. This year, he’s run in four graded stakes, finishing out of the money in each. His last out was the Santa Anita Derby (G1) on June 6, where he finished fourth behind Honor A. P., Authentic and Rushie.

"That was one of his better races," Wright said. "He was a little bit more precocious than we had wanted him to be. But he broke so darn good. (Jockey Victor Espinoza) kind of noticed that the one time when (Joel) Rosario smashed him there back in Louisiana (in the Risen Star stakes) because it got a little tight, the horse kind of shut it off. We weren’t really sure why, we didn’t really have an excuse.

"So he was afraid of kind of taking a hold of him too much and him stopping on him. So he let him hang up there, and that was a good distance, that was one of his better races, and we got outrun by some pretty nice horses that day. We’re just trying to get there."

He was going to run in the Los Alamitos Derby, "but he got a low-grade infection a couple of days after shipping from Golden Gate, so we had to take him out and obviously couldn’t run him." Wright said. "A couple days after we got down there, he ran a fever for about 24 hours and then a low-grade infection showed up in his blood a couple days later. So we had to skip that race.

"And we were entered in the Shared Belief last week, but Mr. Redekop wanted to run in the Ellis Park Derby, so here we are."

Wright said Anneau d'Or is "a pretty laid-back stud colt. He’s not over precocious, he can turn it on and turn it off. His workouts kind of reflect that. That 6-furlong I gave him was kind of a lazy work on his part, and then we worked him out of the gate last week, he really turned it up. So I hope we’ve done enough."