‘I fought it off:’ Trainer Duarte overcomes COVID-19 bout 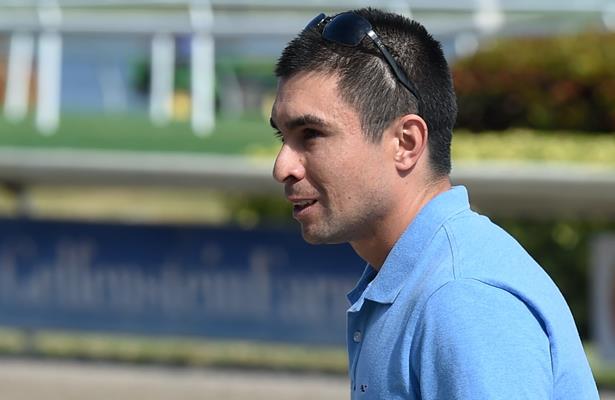 As out-of-state horsemen are welcomed back to Laurel Park this weekend for the first time since live racing returned to Maryland late last month, no one is happier than Jorge Duarte Jr.

The trainer for Richard Santulli’s Colts Neck Stables operation in northeastern New Jersey is eager to get things started for 4-year-old filly Introduced, a Laurel stakes winner last summer who is entered to make her season debut in Saturday’s feature over the track’s world-class turf course.

Even more important, the race is yet another step toward a return to normalcy for the 35-year-old Duarte following his recent battle with the coronavirus. There are still reminders of his ordeal, but being back with the horses has been the biggest healer of all.

“I was a jockey and I had spills. You’re in the hospital for things, but this was unique,” Duarte said. “You get the flu and things like that, but this was very different and very severe. It was tough. I’m happy I fought it off, and we’re still here.

“I’m still recovering,” he added. “I can’t say that I’m 100 percent, but I’m starting to do my workouts again and I’m coming to the barn on a daily basis. It was tough. It was not easy, that’s for sure.”

It was mid-March when Duarte first noticed being a little more tired than normal, ultimately developing a fever that he couldn’t get down below 101 degrees. Recognizing the symptoms, he went to be tested for COVID-19, the results of which came up positive.

Duarte checked into the hospital March 24 and spent a week at Monmouth Medical Center in Long Branch, N.J. He developed pneumonia and was put on oxygen, but did not require a ventilator.

Once discharged from the hospital, Duarte quarantined at home, and a subsequent test for the virus in April came back negative. His former boss, retired trainer turned Colts Neck racing manager Alan Goldberg, stepped in while Duarte recovered.

“My age [helped], and my fitness level, too,” Duarte said. “I still keep pretty active, even though I’m not riding races or horses in the morning. It hits everybody different. I’m still getting better. I still have a little shortness of breath and stuff like that, but I think my body should fight this off completely.

“[I was] two months away from the barn and a week in the hospital. Alan filled in for me, so that worked out pretty good. I was fortunate to have a lot of support,” he added. “Now everything’s back to normal and we’re starting to crank it up a little bit and see what this year offers. It’s been unique, that’s for sure.”

Introduced will be the eighth starter for Duarte since his return and his first in Maryland. He has two wins, both coming on the June 3 program at Belmont Park, including the aptly named Strongerthanuknow.

A Maryland-bred daughter of El Padrino, Introduced won the six-furlong Miss Disco on the dirt last August, but has one win, one second and one third in four tries over Laurel’s turf course. She was fourth as the favorite in a 5 1/2-furlong open turf sprint allowance Sept. 29, her most recent start.

“She ran pretty hard last year early on in the spring and part of the summer. She’s a Maryland-bred, and most of the time she had to ship down to Laurel to run. We’re like three hours and change from Laurel,” Duarte said. “So, by the time we ran her last time, she was getting a little bit tired. The campaign took a little bit of a toll on her so we decided to give her some time off.

“There was nothing wrong with her,” he added. “She’s come back great this year. We were waiting to run her when Laurel reopened but due to the COVID restrictions we couldn’t get to run. Now she’s peaking, she’s ready and we’re expecting her to run big.”

Introduced drew Post 13 for Saturday’s Race 8, an open allowance for fillies and mares 3 and up going 5 1/2 furlongs over the Exceller turf course layout. A total of 16 horses were entered, including three alternates and Trunk of Money, in Post 7, for main track only.

Duarte is in his second full year as a trainer, taking over the Colts Neck horses following Goldberg’s transition after working as his assistant for four years. A winner of 424 races as a jockey between 2000 and 2010, Duarte won 35 of 195 starts in 2019 with more than $1.7 million in purse earnings.

“It should be a cozy post for her. She’s got natural speed so we can see how everything’s developing, either she’s in front or right off the lead,” Duarte said. “Being fresh, she might show a little more speed. She likes that turf course so we’re looking forward to it.”