'I loved her'; Champion La Verdad dead after bout of colic 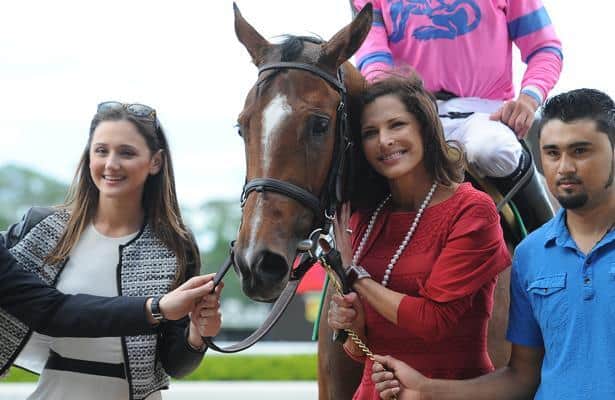 Lady Sheila Stable, nom de course of Sheila Rosenblum, reported that Eclipse Award-winner La Verdad was euthanized on Sunday due to complications of colic at the age of 10.

A statement from Lady Sheila Stable said, "The Eclipse Award winning champion gave birth to a healthy colt by Into Mischief on Monday, May 4th. After a few days of medical attention, she was humanely relieved of her distress this afternoon."

The bay daughter of Yes It's True was bred in the Empire State by Eklektikos Stable, who also campaigned her for her first four starts. La Verdad was named Champion Female Sprinter in 2015 after winning five-of-eight starts, including graded scores in the Grade 2 Distaff Handicap at Aqueduct Racetrack and the Grade 2 Gallant Bloom and Grade 3 Vagrancy at Belmont Park. She completed the memorable campaign with a runner-up effort in the Grade 1 Breeders' Cup Filly and Mare Sprint at Keeneland.

Thank you to everyone who has reached out about the loss of our champion mare. Completely heart broken. #laverdadforever pic.twitter.com/61i6ZkWRhR

Trained throughout her career by Linda Rice, La Verdad raced almost exclusively in New York, venturing outside of the Empire State just twice in a 25-race career that saw the talented bay post a record of 16 wins and three seconds with purse earnings of $1,563,200. She was piloted through 23 of those starts by Jose Ortiz, while his brother, Irad Ortiz Jr., guided the mare on two occasions.

A winner at second asking on April 7, 2013, at the Big A, La Verdad won nine of her first 11 starts. Her four career graded wins also included a victory in the 2014 Grade 2 Distaff Handicap at Aqueduct.

"La Verdad was not only a racehorse. She was a symbol," said the statement. "She represented women in racing. As a mare. As a horse trained by Linda Rice and owned by Sheila Rosenblum. And she represented our state and our tracks, as a NY bred never hesitating in the face of competition."

The New York Racing Association named a stakes race in La Verdad's honor in 2018 offered at a distance of seven furlongs on the Aqueduct main track where the mare won on eight occasions.

La Verdad has produced four foals including three fillies along with the recent Into Mischief colt. Her first foal, La Kara Mia, a 3-year-old daughter of Medaglia d'Oro, is in training with Rice at Belmont Park.