Hush of a Storm stays perfect on synthetic with Battaglia score 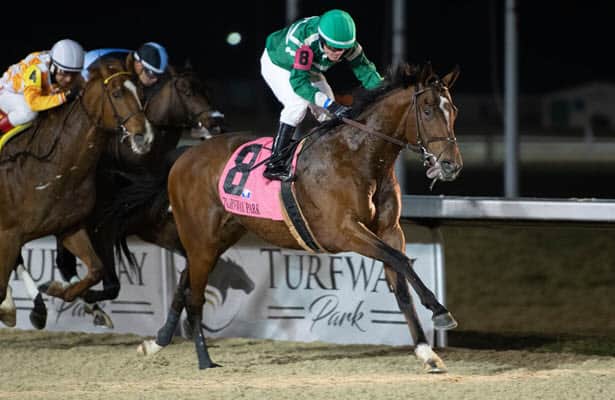 Hush of a Storm continued his unabated climb up the ranks when rallying from off the pace to earn his third-straight victory in the $100,000 John Battaglia Memorial Stakes at Turfway Park on Friday night for trainer William Morey.

With the win in the new Kentucky Derby prep, Hush of a Storm collects 10 qualifying points towards the first Saturday in May at Churchill Downs. The next stop on Turfway's road to the Kentucky Derby is the $250,000 Jeff Ruby Steaks on March 27, which awards 100 points to the winner.

Hush of a Storm had to sweat out a stewards' inquiry to earn the win. The son of Creative Cause was widest of all as part of a four-horse cavalry charge to the wire in the stretch when Hard Rye Guy, who was on the rail, got squeezed and was forced to take-up. The chart notes Hush of a Storm was "bearing-in" in the stretch, but in head-on replays he did not appear to change paths. It also points out "rider did a good job keeping him off rivals." After a 13-minute review, stewards' ruled no foul occurred and the order of finish remained.

Hush of a Storm prevailed by 1 1/2-lengths over Like the King, who earned four Kentucky Derby qualifying points for trainer Wesley Ward. Even-money favorite Gretzky the Great (2 points) was another neck back in third followed by Hard Rye Guy (1 point).

In a field reduced to 11 with two scratches, Hush of a Storm and jockey Santiago Gonzalez had just one horse beat entering the first turn of the 1 1/16-miles heat, which was contested over a synthetic surface. Up front, Gretzky the Great found himself on the early lead after breaking sharply from the rail for trainer Mark Casse.

As the field set fractions of 23.86 and 47.11 for the opening half mile, Hush of a Storm was saving ground along the rail while steadily improving his position. With six furlongs completed in 1:11.24, Hush of a Storm was deftly angled out widest of all and proved best to the wire down the stretch to earn his first stakes win for trainer William Morey.

Owned by the Joseph P. Morey Jr. Revocable Trust, Hush of a Storm has been perfect since switching to Turfway's synthetic main track. He was no factor when debuting last fall at Churchill Downs, but in three subsequent starts, all at Turfway, he's tallied a maiden win, first-level allowance and now a stakes. By Creative Cause, he was a $75,000 auction purchase as a 2-year-old last year.