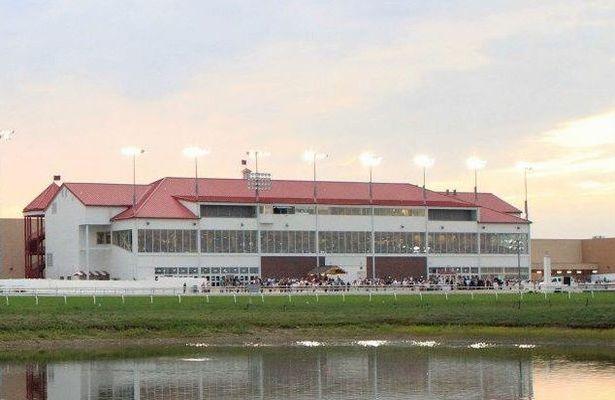 It was a day of upsets at Indiana Grand Racing & Casino Wednesday, July 9. Fresh on the heels of a $224.40 winner in the afternoon’s fourth race, which set a new track record for a $2 payoff at Indiana Grand, Malcolm Franklin guided Huntstown to victory in the $85,000 Snack Stakes, a 41-1 longshot in the 12-horse field.

Starting from post seven, Huntstown broke with the pack and steadily held his ground on the outside as Just a Morgan and Perry Ouzts got the first call in the one mile turf race. Bisque and rider Jeremy Rose also grabbed early positioning near the lead with Mister Pollard and Ricardo Santana Jr. pressing the pace along the outside. Huntstown was still not playing in as a factor down the backstretch.

When the field began to enter the turn, several from the back of the pack moved closer to the leaders, including Huntstown. At the top of the lane, a few quick taps of the whip was all Huntstown needed and he went sailing by the front runners. Just as Huntstown was making his move on the outside, Proud Azteca and Miguel Mena snuck through along the inside for the stretch drive. In the end, Huntstown proved to be too much for the field to handle, drawing off to a two and one-quarter length advantage for his first win of 2014 and his first stakes victory. Proud Azteca was a solid second over Bisque, who prevailed in third against the rest of the contenders.

“I just wanted to break and get into position and let him (Huntstown) find his stride,” said Franklin, who was aboard the horse for the first time in the Snack Stakes. “The whole race he was on the bridle, but he has an easy way of going. When I asked him he really responded. Today was his day.”

Huntstown is owned by Marion Wells’ Romar, LLC and trained by Wayne Mogge. Mogge, who has multiple leading trainer titles to his credit from Turfway Park, recently relocated his stable of 15 to Indiana Grand and is continuing to add Indiana bred horses to his fleet, including Huntstown.

“We decided to take a shot and claimed this horse (Huntstown) for $25,000 hoping he would be good on the turf against Indiana bred horses,” said Mogge. “The only thing I told Malcolm (Franklin) was to give him a light warm up and then take him back after he got positioning.”

Huntstown earned his second career trip to the winner’s circle in his eighth lifetime start. The three-year-old grey son of Unbridled Energy more than doubled his career earnings to just over $88,000. The Snack Stakes was his second start on the turf, turning in one turf race at Churchill Downs this past fall to no avail.

The Snack Stakes is named after a former Indiana bred standout, Snack, who garnered four wins in nine outings for owners and breeders Penny and Mike Lauer. The sixth running of the event was won by Lauer, who saddled Sneakin Away to a victory in 2012.