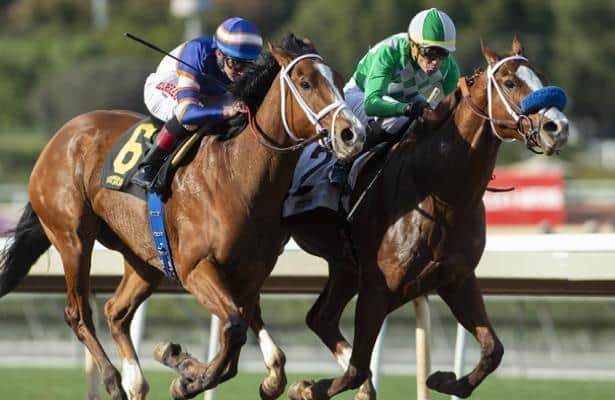 Saying a “culture of hysteria” contributed to his horse’s recent veterinarian scratch at Santa Anita Park, owner George Sharp has filed a lawsuit against the track and its owner/operator, The Stronach Group.

The suit, submitted to the Superior Court of California in Los Angeles, details the decision to scratch 6-year-old California-bred gelding League of Shadows, a Turf Paradise shipper, from the Jan. 18 California Cup Sprint Stakes.

Sharp’s complaint was written in the context of “the alarming increase in the number of equine fatalities at Santa Anita since December 2018” and “oppressive, sometimes draconian, and continually evolving rule changes” made in response. He cited pressures created by the government, animal rights groups and the general public to prevent further breakdowns.

“The defendants have created a culture of hysteria in the horse community by implementing ad hoc and ever changing rules applicable to horsemen wishing to race at the racetrack, which in effect, are designed to place responsibility for the increased number of equine fatalities at the horsemen’s doorstep,” Sharp’s complaint reads. “Such rules have been an albatross around the neck of even the most conscientious horsemen.”

Sharp said Kerri Raven-trained League of Shadows was examined and deemed fit to run in the California Cup Sprint upon arrival at Santa Anita; the morning of the race; and in the paddock and walking ring.

According to the lawsuit, track veterinarian Dana Stead conferred with jockey Rueben Fuentes before the horse loaded. Fuentes said “the horse had no soundness issues,” and Stead scratched League of Shadows to the “dismay” of the jockey.

Sharp approached Stead after the race, which Fashionably Fast won by a neck over Lieutenant Dan. The veterinarian told the owner he observed League of Shadows “off” in his right front and hind end.

Sharp had private vet Sarah Jones examine League of Shadows after the race. The next morning, another private vet, Cathy Canfield, also looked over the horse. Both, according to the filing, “pronounced that (League of Shadows) was fit for racing and offered her opinion that the horse should not have been scratched from the California Cup Sprint.”

Sharp, who thinks his horse was “likely to win,” missed out on the $90,000 winner’s share of the $150,000 California Cup Sprint purse. He noted fees such as training costs to prepare the horse ($1,881), transport to Santa Anita ($700) and the process of getting League of Shadows off the vet list to race again.

Sharp wrote that he “was humiliated by the falsely created perception that as a horse owner, he was attempting to race an unfit horse.” He is seeking from Santa Anita and The Stronach Group an amount “proved at trial, but no less than $90,000.”

Since California Cup Sprint day, Sharp adds in his lawsuit, he has come to believe that his horse was scratched for “the sole purpose of creating the façade that the defendants were dealing with the escalation of horse fatalities at its facility.” Sharp was also told "that the defendants have systematically committed these acts of fraud against other horsemen.”

League of Shadows, a son of Gotham City, has won three of his 15 starts. He raced previously at Santa Anita in maiden claiming company on Jan. 1, 2018. After last month’s scratch, League of Shadows returned to the work tab Jan. 29 and finished sixth of eight in Saturday’s $75,000 Phoenix Gold Cup Handicap at Turf Paradise.