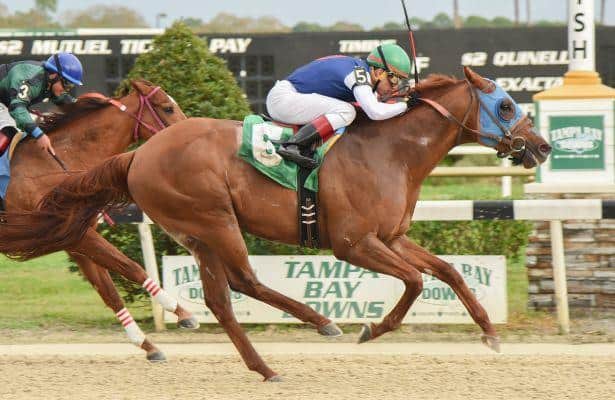 Michael Hui has populated his racing stable by claiming horses in the $50,000-$80,000 range and having trainer Mike Maker turn them into graded-stakes horses.

Both horses are 7 years old and were claimed for $62,500 two races back. In their first start for Hui and his partners Mark Moore (Hooties Racing) and WSS Racing (Bill Simon), both horses ran in stakes.

“That’s kind of where it falls; I would love to pay less,” Hui said with a laugh about his price range for claiming horses. “But I guess I’ve been that little kid getting his finger burned touching a hot pot. I haven’t had that much success claiming horses for $40,000 or $30,000 or $25,000. It falls in line with that you get what you pay for.

“What I’m really looking for is what I call the older horses, but it really isn’t that old: 5, 6, 7. I hate to say that people have given up on, but they’ve run out of (allowance) conditions. That seems to be the spot (dropping into a high-priced claiming race); you can catch a pretty good horse with limited issues.”

Typical of turf racing, Tiger Blood finished eighth but lost by only 1 3/4 lengths against an extremely tough field in Keeneland’s Grade 2 Shakertown on July 11, his first start since being claimed 2 1/2 months earlier. Tiger Blood also was head-and-head on a wicked pace before weakening late.

“Tiger has had more time away from the actual races than he’s had in three years,” Hui said. “He’s in training, but Mike backed off of him, gave him a break. Mike’s had a little more time to figure him out and we ran him back in a big spot. He’s progressing nicely. He’s put on weight, and he’s happy. We expect him to run big at Ellis Park.”

Hay Dakota got up on the last stride to take second by a nose in Indiana Grand’s Jonathan B. Schuster Memorial.

“It’s a perfect spot from a timing standpoint,” Hui said of the Ellis stakes.

Maker’s stable is loaded with turf horses. Among the horses Hay Dakota will have to beat Sunday is stablemate Hembree, a $50,000 claim by Maker client Three Diamonds Farm that subsequently won a Grade 2 stakes and has run against some of the best turf milers around. Three Diamonds also put up $7,500 to make 30-1 long shot All Go a supplemental entry, that gelding’s role would seem to be to ensure a legitimate pace for the late-closing Hay Dakota.

Hui claimed the then-5-year-old Zulu Alpha, who last year became a Grade 1 winner and captured Kentucky Downs’ Kentucky Turf Cup (G3), for $80,000. He claimed Hogy for $80,000 at age 8 and in his next start won the Kentucky Downs Turf Sprint (G3). More recently, Parlor was claimed for $80,000 last November and this year has earned more than $128,000, including a nose defeat in Keeneland’s Maker’s Mark Mile (G1) in his last start.

Maker also has Three Diamonds Farm’s stakes-winner Empire of War in the Kentucky Downs Preview Turf Cup at 1 1/4 miles, where the 10-1 shot will face 2019 winner Factor This. But you can expect his horses coming ready to fire.

Santa Anita winter-spring meet to include up to a 2-week break
The California Horse Racing Board approved a 2022...