How to bet Saratoga's Fourstardave Handicap Pick 4 on a budget 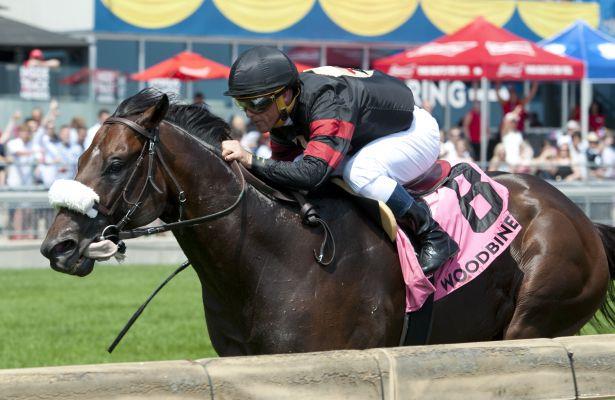 Photo: Michael Burns Photography
Saratoga will on Saturday offer a Late Pick 4 featuring two stakes races, including the Grade 1, $500,000 Fourstardave Handicap going a mile on the turf.
Saturday's Pick 4 sequence will start with the aforementioned Fourstardave, carded as Race 8 at Saratoga with a scheduled post time of 5:02 p.m., and run through Race 11, a flat mile maiden claiming turf affair for New York-breds.
The Late Pick 4 will have a minimum bet of 50 cents, and once again, I will use one of my favorite cost-effective Pick 4 wagering strategies, the spread ticket formula. It would cost $187.50 to lump all of my contenders on one ticket, but the spread ticket formula knocks the price down to a more affordable $48.

Primary - #2 DELTA PRINCE, #4 Made You Look
Secondary - #7 Yoshida, #5 Heart to Heart, #6 Voodoo Song
Analysis - #2 Delta Prince (4-1) is a half length away from a perfect 5-for-5 record at this distance on turf. He returned with a sharp score in the G2 King Edward at Woodbine, and he easily captured a local optional claiming turf route last summer. #4 Made You Look (4-1) earned improved numbers in both 2018 starts for Chad Brown. In his lone local turf try, he took down the G2 With Anticipation as a juvenile in 2016. #7 Yoshida (3-1) is back from Ascot for Bill Mott, and he won his last two graded turf routes in the U.S. #5 Heart To Heart (2-1) is a sharp, classy veteran with speed, but #6 Voodoo Song (9-2) is also a speedster. Those two might set the table for an off-the-pace type. #3 Divisidero (8-1) is cross-entered in the G1 Arlington Million, and he is expected to go in this spot. He appears best at nine furlongs and might find a flat mile a tad sharp.

Primary - #1 PATTERNRECOGNITION, #3 Mask
Secondary - #2 Phi Beta Express
Analysis - #1 Patternrecognition (9-5) exceeded the winning par for this in a seven-panel place finish at Belmont on June 10 (one next out winner and one runner-up). He is a big win threat with anything resembling his last, and Chad Brown also saddles #3 Mask (3-1). The latter smartly won his first two outings, and he tries to get back on track after a failed effort in the slop (G3 Pat Day Mile), as well as a disappointing fourth as the chalk in the Easy Goer (zero next-out winners so far). It looks like Javier Castellano chose him over the rail-sitter. #2 Phi Beta Express (5-1) reconnects with winning rider Kendrick Carmouche, and he is almost certainly going to attempt a wire job. He romped in a local dirt sprint last summer.

Primary - #9 ZENNOR, #3 Inspector Lynley
Secondary - #1 Projected, #5 Mr Cub, #2 Blacktype
Analysis - #9 Zennor (9-1) won this race last year under Saturday's rider, Joe Bravo, and he has not been seen since. He obviously has soundness issues, but he runs well fresh for Kiaran McLaughlin (4-for-13 at Saratoga). #3 Inspector Lynley (7-2) hit the board in his last three outings, and he won his lone local turf outing in the G3 Saranac in 2016. Look for him late under Jose Lezcano. #1 Projected (5-2) owns competitive numbers for Castellano/Brown, but he is only 3-for-17 on turf with eight runner-up finishes. He will probably finish somewhere in the top three but figures to get overbet on the win end. #5 Mr Cub (6-1) enters in decent form and has early/pressing speed in a race without much pace. #2 Blacktype (8-1) got back on the beam in a flat mile optional claiming win at Belmont July 5. He owns running style versatility.

Analysis - #1 Dancingwthdaffodls (5-1) is back on turf third off the shelf, and the inside post is 7-for-11 in one-mile races on the inner turf course (post position stats thru August 8). She split a 12-horse field in her lone turf try, and that was against New York-bred maiden special weight foes at seven panels. #7 I Like Your Style (6-1) stretched out to a flat mile on turf and earned his best number yet in a show finish at Belmont June 27. Jeremiah Englehart excels with his second route starters, and she can compete for the win here with another forward move. #4 Super Mama (2-1) was previously in the Chad Brown barn, and she took money in all four outings (beaten favorite 3 times) and came close to winning under Saturday's rider Javier Castellano in the fall of 2016. She returns in the Jorge Abreu barn and he is 3-for-14 at Saratoga. AE #12 Hit a Provisional (5-2) rallied to miss by a neck in her turf sprint debut at Belmont, and she is a logical contender for Abreu if she draws in. AE #13 Shanghai Dreams (3-1) rallied for fourth from post 12 in her turf sprint bow at Belmont. She has every right to move forward if she gets in.