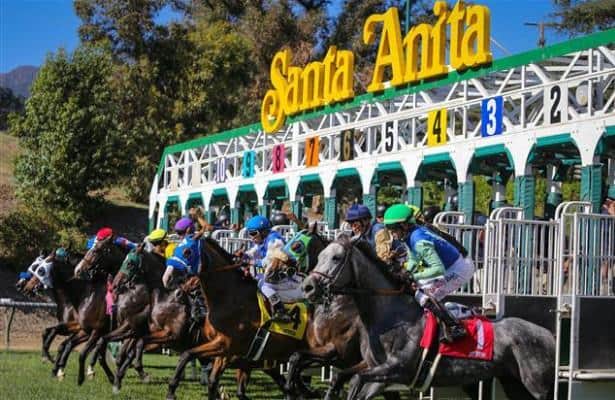 Racing returns at Santa Anita Park Friday, and bettors who have yet to check out Horse Racing Nation's Pro Reports can try before they buy for opening day. Although stakes action won't begin until Saturday, plenty of potentially lucrative handicapping puzzles await.

The downhill turf course configuration is certainly a specialty, and that's where Race 3 on the card will be contested. Taking a look at the Track Trends Tool, there have been 42 sprint races over this course since Jan. 1, 2021.

Overall, this plays like a fair surface. Inside posts are winning at the highest percentage. Gates 7 and out are winning at 36 percent. The middle posts of 4-6 have the lowest win percentage of the three. Horses who stalk the pace have had the most success, though pacesetters and closers both have a win rate of over 25 percent.

What to do with this information? For me, seeing that horses aren't significantly advantaged or disadvantage by running style or post position takes one variable out of the handicapping equation. No. 6 Stella Noir (3-1 morning line) does have experience and a win on this course at this distance, an advantage over her competition.

Power Picks have landed on a price in Race 6. No. 7 Smilin Evie (5-1) is the fifth choice on the morning line. Data on this successful trainer and jockey combination has contributed to her ranking as a player against this field. However, the Sire Moves Report has bad news for Power Picks.

Sire Tom's Tribute is 0-for-20 with dirt routers. Smilin Evie will be stretching out to a mile for the first time, and pedigree suggests that this will not be to her benefit. On the dam side of the family, none of the siblings have won going a route of ground on the dirt.

With these product conflicts and my own assessment of the race, this is a horse I would keep in mind for when she cuts back in distance. I would give a look to No. 6 Beignet (6-1) as a price that at least has had success going the mile. With a win and a runner-up effort at the distance on dirt, I think that these conditions suit her better than some of the shorter-priced options.

In Race 8, the Horses to Single Report identifies No. 2 Redline (1-1) as a reliable winner. Over the last 100 races, this report has a 44.0 percent success rate. Expanding that to the last 200 races, that win rate stands at 47.5 percent.

Though I agree that this is the horse to beat, I do see a contender with a pace advantage on Redline. No. 6 Traegar (4-1) is still lightly raced and will be making his third career start. He'll have to improve to be competitive against Redline, but his early speed makes him a dangerous alternative to the favorite. The Pace Report agrees with this assessment, bolstering my confidence that this could be an opportunity to beat the chalk.

Breaking from post No. 9 last time out, he was involved in the early fractions along with three other horses, one of whom was the heavy 1-2 favorite No. 11 Hopkins. That favoritism inflated the prices of everyone else, and Traegar got the money at a generous 18-1. Perhaps he can spring another mild upset facing winners for the first time.