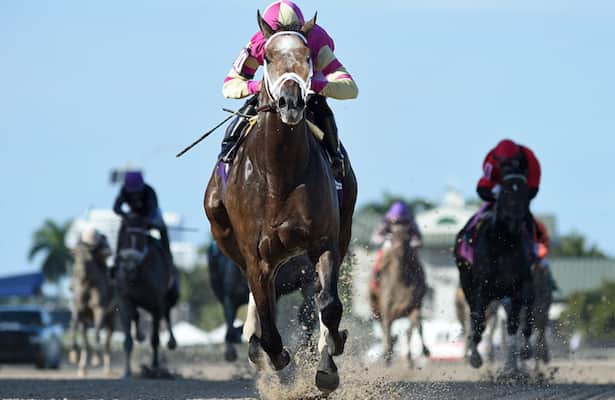 Only one horse was covered in the final race of Friday's Pick 6 at Belmont Park after just a single favorite was successful within the first five legs. That horse, No. 6 Fast N Fearious (2-1), had to settle for second in the finale triggering a carryover into Saturday's card.

Horse Racing Nation's Pro Reports offer insight on how to approach this sequence.

Maidens start off the Pick 6 in race 5, where the First-Timers Insight Report highlights both first and second time starters. Trainer Chad Brown sends out debut runner No. 4 Internal Capital (5-2 ML) with jockey Flavien Prat aboard, a duo that is extremely likely to take money.

Though some will single Internal Capital to begin, the "other Chad" No. 7 Running Bee (10-1 ML) could be considered as well. Brown wins 28 percent of the time with second time starters in comparison to his 20 percent success rate first time out. Running Bee puts blinkers on for this effort as well.

In race 6, No. 2 Endowed (9-5 ML) is the top Power Pick. The top Power Pick has been successful 32.8 percent of the time over the last 60 days. Endowed is just a maiden winner so far, but being so lightly raced gives him potential upside against a group like this.

The Sire Moves Report shows No. 2 She's a Mia (3-1 ML) in Race 7 as a horse who is likely to move up considerably with this cut back in distance. Second going 1 1/16th miles last time out, she now shortens up to 7 furlongs. Her sire Astern (AUS) is only 5 percent with turf routers, but that changes significantly with turf sprinters. Less distance on the grass results in a 23 percent win rate for his progeny. The HRN Impact score is a very healthy +148 percent.

Stakes action in race 8 is predicted to feature a hot pace, according to the Pace Report. In the Dwyer, No. 1 Charge It (4-5 ML) is the expected leader early on. Charge It returns off a lackluster effort in the Kentucky Derby for trainer Todd Pletcher. Prior to his Derby attempt, he finished second in the Florida Derby in only his third career start. 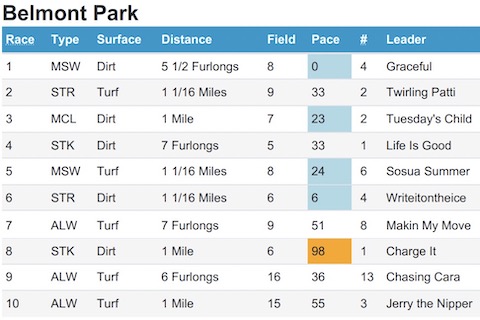 Back on the turf for race 9, jockey Flavien Prat is on No. 1 Shannon (7-2 ML). While Prat does have the best win rate of those riding the turf courses on Saturday at 17 percent, his expected win rate based on the odds of his mounts thus far is 22 percent. The Hot Jockey Report indicates that he is being overbet, even though he is winning at such a high percentage.

Jockey Javier Castellano, riding No. 6 A Little Faith (10-1 ML) has the best HRN Impact score of those with more than 10 mounts total. He has been winning at 13 percent but has been expected to do so 11 percent of the time. Therefore his HRN Impact score is +14 percent.

With some rain in the forecast for Saturday, main track only entrants must be considered as well. From four to choose from in the finale, Power Picks rates No. 15 Efficiency (8-5 ML) as the best selection in case this race comes off the grass. If run as scheduled on the turf course, the second selection is No. 3 Jerry the Nipper (5-1 ML) who could also be the speed of this race. 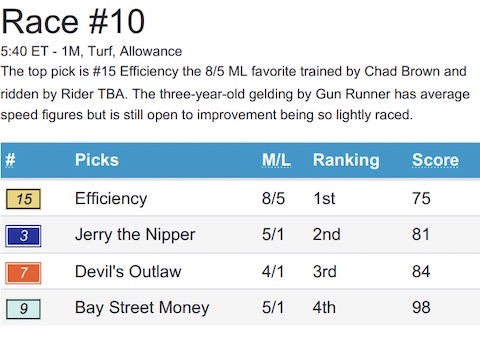