How a 'roller-coaster ride' made Art Collector a Derby favorite 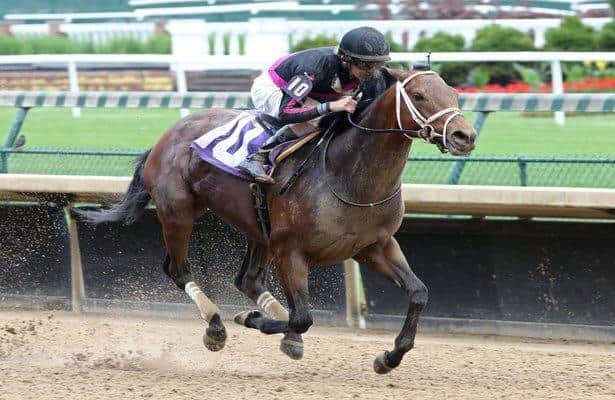 Whether it has been launching businesses or running for public office, Bruce Lunsford has been through a lot of campaigns in his 72 years. Now he finds himself in the middle of a blossoming Kentucky Derby campaign, and it's different.

“This is closer to my heart,” he said. “This would be a nice thing to do for my family and for my close friends.”

Suddenly he has a horde of wannabe friends trying to join the parade led by Art Collector. Lunsford’s home-bred colt is the newest rising star in the 3-year-old class after Saturday’s 3 1/2-length victory in the Blue Grass Stakes (G2) at Keeneland.

“We just had a field day,” Lunsford said in a telephone call Sunday, the day after he and a group of five family members and friends watched the race in the relatively empty grandstand. “It was like being with a few fraternity brothers. We just sort of laughed it up.”

For good reason. The victory gave Art Collector the points he needed to run for the roses. It also gave Nevada bookmakers a reason to make him one of the top four betting choices in futures markets for the Kentucky Derby. Now best priced at 8-1 (+800), only Tiz The Law (+220), Honor A. P. (+665) and Authentic (+695) carry shorter odds.

“I don’t think right now that anybody’s showing a better kick from the head of the stretch to the finish line than we have,” Lunsford said. “If I’m in the hunt at the top of the stretch, I got a shot.”

Just getting into the Derby will be an accomplishment for a horse that was technically just a maiden winner coming into the spring for his new trainer, Tommy Drury.

“It’s been a little bit of a roller-coaster ride,” Drury said after Saturday’s race. “Everybody was fighting the same thing with COVID-19 and the uncertainty. It takes a village to get these things. I’m just honored to be able to share this with my staff and everyone that worked to get him here.”

Because of the pandemic, Art Collector would not have made it to a May 2 running of the Kentucky Derby. And Drury might not have been training him.

It all goes back to March, when the colt by 2006 Preakness winner Bernardini had to be moved to another barn. It had been reported that he had tested positive for levamisole, a worm-killing drug that is sometimes used as a performance enhancer. That meant a disqualification. Art Collector lost his November allowance victory at Churchill Downs, and trainer Joe Sharp lost Art Collector, one of 12 horses in his stable that were said to have failed drug tests in Kentucky and Louisiana.

“That was just an unfortunate situation where the feed contaminated some of his horses,” Lunsford said. “I just gave back the purse money. I also felt like the horse needed a break. I gave up the Derby.”

That is when Drury wound up with Art Collector in a move that was supposed to temporary.

“We’ve worked behind the scenes with a lot of his horses over the years and getting them ready for other guys,” Drury said last week. “Bruce said he was just going to be shuffling the deck a little bit. We were going to take some horses until he figured out what he was going to do.”

But within two weeks the coronavirus laid waste to business as usual in Kentucky. Keeneland called off its spring meet. Churchill Downs postponed the Kentucky Derby.

Those Kentucky horses still needed races, but there were not any in their back yard. Shipping out of the commonwealth got complicated because of the spiraling pandemic. Staying put became the prudent choice.

“As all this stuff happened with the COVID and people were not moving, we could still train at (Drury’s) farm,” Lunsford recalled. “I said, ‘Tommy, get this horse ready.’ And I made the decision that if Tommy won the first race back, he could keep him.”

That was May 17, when Art Collector came out of post 9 against 10 other horses in a seven-furlong allowance at Churchill Downs. He closed from 6 3/4 lengths behind in seventh to win the race by 2 3/4 lengths. Drury got to keep the horse.

“I kind of just lucked into him,” he said. “I’d rather be lucky than good any day.”

“That is as impressive as it gets to kick clear as he did,” Drury said the morning after.

The Blue Grass then became as much a valedictory as it was a springboard to the Derby. Art Collector’s 103 Beyer on Saturday was the best for any active horse on the Derby trail. It was also the first graded-stakes victory in Drury’s nearly 30 years of training. As he put it, “It took me my whole life just to get to this one win.”

Now the choice for Lunsford and Drury is whether to give Art Collector one more race or just train him right up to Labor Day weekend at Churchill Downs.

“That’s the big question,” Lunsford said. “On one hand I’d love to save the eight weeks.”

While Drury suggested that the Ellis Park Derby on Aug. 9 could be next, Lunsford said it does not even have to be a stakes start. “I could even run an open allowance race just to keep the horse sharp,” he said. “We’re not trying to pick the next race up the ladder.”

Lunsford wants to stay as close as possible to Art Collector’s home at Skylight Stables in Goshen. The 150 miles to Ellis Park in Henderson would be close enough.

It was difficult for jockey Brian Hernandez Jr. to contain his enthusiasm for Art Collector. “We’ve got one of the Derby favorites now,” he said Saturday. “You’ve got to be excited.”

But Lunsford, who has run for governor and the U.S. Senate, was not letting Derby dreams keep him from relishing the triumph that Art Collector gave him on Saturday.

“We didn’t have any stakes wins or anything before this,” he said. “I said this is the classic chicken-or-feathers day. We got through it with the chickens.” 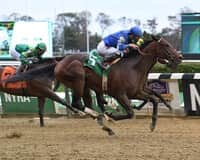