How the Preakness fits Lukas' plans for Secret Oath 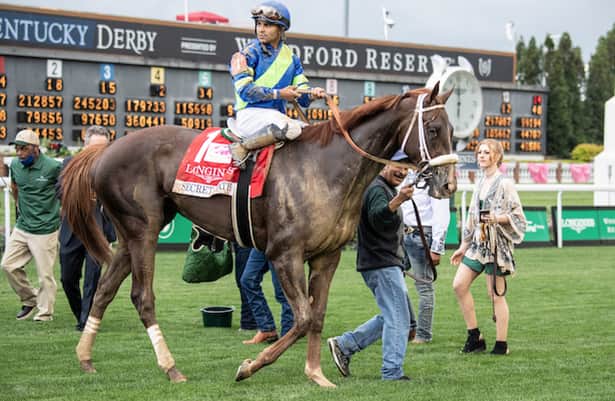 Hall of Fame trainer D. Wayne Lukas has been a modern-day trendsetter in many ways, including his successes with running fillies and mares against males in some of America’s biggest dirt races.

He’d like to make Briland Farm’s Kentucky Oaks winner Secret Oath an Eclipse Award winner as well and believes running in the 1 3/16-mile Preakness Stakes could be an important step.

Preakness update: Who's in, who's out and who's possible

But before that, Lukas said, he needed to believe that Secret Oath fit with her male competitors in the May 21 middle jewel of the Triple Crown and, most important, that she came out of her two-length victory in the Kentucky Oaks over favored Nest in good order.

“We discussed it thoroughly,” Lukas said, referencing owners Rob and Stacy Mitchell. “We kind of researched who was going and who might be going, trying to get a feel for the race. Checked her another day and found that she was full of life and playing out there. So we decided we’d take a shot and go.”

Lukas said there were no other logical races on Secret Oath’s dance card until the July 23 Coaching Club American Oaks (G1) at Saratoga, leaving plenty of time after the Preakness.

“She’ll have an eight-week break, which is important, before the Coaching Club,” he said Thursday. “Then she’ll get another month before we run in the Alabama (G1). Those are the two we’re actually trying to get her ready for.

“The Preakness, I think it’s a decent fit. I think we’re very competitive in there with those horses. I have the greatest respect for some of those horses that ran in the Derby. It will not be easy, but she’ll make the race very interesting,” he added. “I don’t think the (Oaks) was extremely hard on her. They’re all tough, but she was on cruise speed down the backside, and then she made that big run. We wanted a couple of days to see where we’re at, and it looks like we’re in pretty good shape.”

“If she would put the Preakness on her resume, it’s going to take her to another level,” he said. “The media members will start thinking of her as one of the really good ones. If we can pull it off, it will be exceptional for her.”

Lukas won his first of four Kentucky Derbies with Winning Colors, whose weapon was her speed.

“This filly has a little better dimension,” he said. “She stalks them and then makes a run. She doesn’t have to be near the pace, she can come from back. She’s very versatile, very manageable. (Jockey) Luis (Saez) will be able to manage her, depending on how the race goes.”

Meanwhile, Oaklawn Park’s Rebel (G2) runner-up Ethereal Road is headed for the $100,000 Sir Barton on the Preakness undercard for horses who haven’t won an open stakes. The colt was scratched from the Kentucky Derby because Lukas didn’t feel Ethereal Road was as sharp as he wanted after running in both Keeneland’s Blue Grass (G1) and Lexington (G3) a week later.

Ethereal Road indicated he has rebounded with a “bullet” five-furlong workout in a minute Wednesday at Churchill Downs. Lukas said he galloped out six furlongs in 1:12 and that the Sir Barton could be a launching pad to the Belmont Stakes.