How life has changed, and hasn’t, for Derby-winning trainer Reed 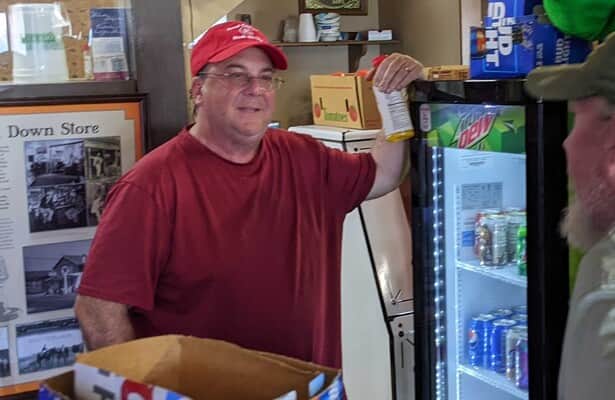 You can’t miss it. If you are driving on the north side of I-64 in Fayette County, it is smack in the middle of the most beautiful horse country anyone can imagine.

Right where Russell Cave Road meets the Iron Works Pike, you will find the Jot ’Em Down Store. The sign says it has been there since 1934. That was before Eric Reed came along. And long before Rich Strike turned the racing world on its ear with his two-minute dash to that 80-1 shocker Saturday in the Kentucky Derby.

As long as he can remember, Reed has been showing up at the little joint where you can pick up a good sandwich, a beer and some gossip.

“It’s just like the little bar in the movie ‘Let It Ride,’” Reed said after horse owner Jack Willoughby, his close friend and client, drove him and a visiting reporter in a big pick-up truck to get some chicken-salad sandwiches Tuesday afternoon. “All the horse people hang out. We drink. We watch races. We talk smack. Good food. Good friends. I just like it.”

RELATED: Rich Strike will not run in the Preakness.

On a perfectly sunny spring day, the store was a five-mile drive from Reed’s place. Formerly owned by Spendthrift Farm, the Mercury Equine Center takes in 50 pristine acres of barns and bluegrass. And horses. A hundred of them. No one you would know – except for that suddenly famous chestnut colt, a little more than 16 hands tall, who has a stall in the middle of barn 1.

While Reed was grabbing some lunch, Rich Strike was standing in his stall looking like he could not decide whether to flop down in the hay to take a nap or just blink a little while catching the warm sunshine out of the corners of his eyes.

It all was quite placid. Not at all like it was less than three days earlier, when Reed and his team put some tack and jockey Sonny León on top of the 3-year-old colt, watched him run around Churchill Downs for a little more than two minutes and completely change their lives.

Well, not completely. Lunch was immovable.

“It’s not just all bread with a little something,” Reed said. “It’s the people that are there. They’re genuine people. They’re all horse people. Everybody knows Jot ’Em Down in Lexington.”

There was another big difference. A week ago, Reed was not being pursued by a trail of reporters and TV trucks and random dudes peddling horse products who want the endorsement of the newest Kentucky Derby winner. He was just a third-generation, 57-year-old trainer who has spent most of his life in these parts around horses. Other than that time he was a kid working at a gas station.

“That’s the only job I had in my life other than around a racetrack,” Reed said in the clocker’s stand that doubles as his office at Mercury. “I worked a summer for Pete Sherrow as a 14-year-old. My dad told me I had to do something different for the summer to make sure horses were really what I wanted to do, because that’s all I’d ever done. He just wanted me to taste something else in life.”

Back to Pete Sherrow. In this Derby story that was built on a litany of unlikely circumstances – a $30,000 claim, a fourth-place finish in a forgettable prep race, D. Wayne Lukas scratching his Derby colt just minutes before the deadline – he provided another one of those “Sliding Doors” moments that had to fall into place just so. He introduced Reed to a horse owner from Oklahoma.

“They were friends,” Reed said. “He didn’t know me, and he had already gotten involved with horses through another trainer – a friend of his in Oklahoma. Things hadn’t gone well, so he called and said, ‘I’ve got a couple of horses, and I need to get rid of them. You’re in horse country. Do you know anybody?’ Pete says, ‘Let me call Eric Reed. He’ll tell you the truth and do you right about it.’”

Reed said the horses were in rough shape, although he thought one of them could amount to something. He told the man it was going to cost a lot of money. The man was impressed by Reed’s candor, so he decided to stay in the game. And that was how the long partnership began between Reed, his father Herb and that Oklahoman named Rick Dawson.

The Reeds have Dawson’s back – and his trust. That led them to Churchill Downs last Sept. 17 to look at some claimers. They put in $30,000 tags on a couple horses in the fifth race. One was Twitchy, a Super Saver colt who was making his debut for – get this – Jim “Mattress Mack” McIngvale. The other one was second-time starter Rich Strike.

“This horse went off 4-1 in a maiden special weight, and he ran bad,” Reed said. “Joe Sharp was training him, and he’s a good trainer. And he was owned by Calumet. Then I get to see he had these great workouts at Ellis Park leading up to that race.”

That race was a turf mile last August when Rich Strike had a last-place debut. Reed kept digging.

He looked at the bloodlines. Sired by Keen Ice, the colt who upset Triple Crown winner American Pharoah in the 2015 Travers (G1) at Saratoga. Out of a Smart Strike mare. The more he thought about it, the more this 2-year-old did not look like a grass horse to him.

“Hmmm. Maybe they needed the distance, but they couldn’t get it on turf,” Reed said. “They ran him on turf, because they knew he had to go a mile. I thought if he didn’t like the grass, this horse could be a heck of a claim on the dirt. I called Rick and said this is a complete guess by me, but everything other than the turf made sense.”

Dawson was not completely sold yet. He asked, “What if he doesn’t like the dirt, either?”

“He wouldn’t have been working that fast if he didn’t,” Reed told him. “I believe it’s pretty close to a done deal, in my opinion.”

So Dawson said go for it. Reed put in the claim for both Rich Strike and Twitchy. Rich Strike went off at 10-1 in that one-turn mile on the dirt. Twitchy was 15-1. Rich Strike won by 17 lengths. Twitchy finished 24 lengths up the track in fifth.

They lost a six-way shake for Twitchy, who has not raced since. They were the only ones who put in a claim for Rich Strike. Sold.

“Man, did we ever get lucky there,” Reed said.

In the couple minutes it took him to pull off the big upset last weekend, Rich Strike made himself more than just a small-time claimer – the first, by the way, ever to win the Derby. He carries peak value now, but Reed said there is no desire to sell him. And yes, he has heard from wannabe buyers.

“We’ve had some inquiries already. That’s not on the table right now by any means,” he said, putting “any” in verbal italics. “There’s been a couple farms that have sent gifts. They stand a lot of studs. Rick will handle that down the road. We’re just trying to enjoy the fun right now.”

This has been a reversal of fortune for Reed, who thought about leaving the game 5 1/2 years ago when a lightning strike burned down one of his barns, killing 23 horses. He decided to stick with it, and he rebuilt the barn – but not on the exact same location.

“The new barn is sitting where it would have been half of the old barn,” Reed said, looking about 150 yards outside his office. “It was twice as big. It went all the way down a row of trees down there. Half of it is going to stay hallowed ground. Nothing is ever going to be built on it. It’s there to remember what was there. The new barn can’t even get close to taking its place.”

That is down the hill from the training track. Turn left, go another 150 yards, and that is where Rich Strike lives. He will go back and forth between his stall and the track for now. At least until early next month. Plans to send him to Churchill Downs for some gallops and a three-furlong blowout in preparation for next Saturday’s Preakness Stakes in Baltimore were scrapped Thursday. The team decided against rushing their new star back just two weeks after he became a celebrity. Instead, León will ride him June 11 in the Belmont Stakes.

Thursday’s bombshell announcement meant the current Triple Crown drought is four years and counting. While Reed could bask in the unlikely Derby victory and express confidence that 1 1/2 miles at Belmont Park would be to Rich Strike’s liking, he already had reservations early this week about shortening to 1 3/16 miles next week at Pimlico.

“It’s probably the hardest of the three races for ‘Ritchie,’” he said. “That wasn’t part of our ultimate plan, so now we’re rethinking things.”

Clearly they were. So now Reed gets to hurry up and wait. After three days of interviews and Zoom calls and TV shows, he planned to put aside the constantly chirping telephones and go fishing with his dad Wednesday at a nearby lake.

There was as much talk about fishing Tuesday among the folks at the Jot ’Em Down as there was about the Derby.

“We’re going to go fishing and catch us some more,” said Phil Coomer, another trainer who was having lunch when Reed and Willoughby walked in.

“I planned on doing a lot of fishing before all this came up,” Reed told him.

All the while, Rich Strike was back home just down the hill. Just another day on the farm.