Favorites are winning more than half the races at these tracks 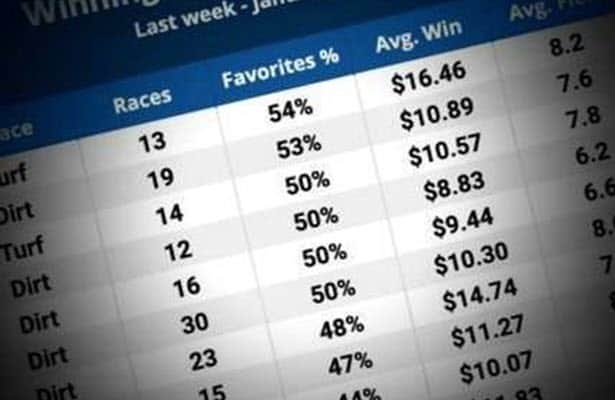 With the first full week of the new year complete, Horse Racing Nation took a closer look at how race favorites performed at certain tracks and surfaces throughout the United States. 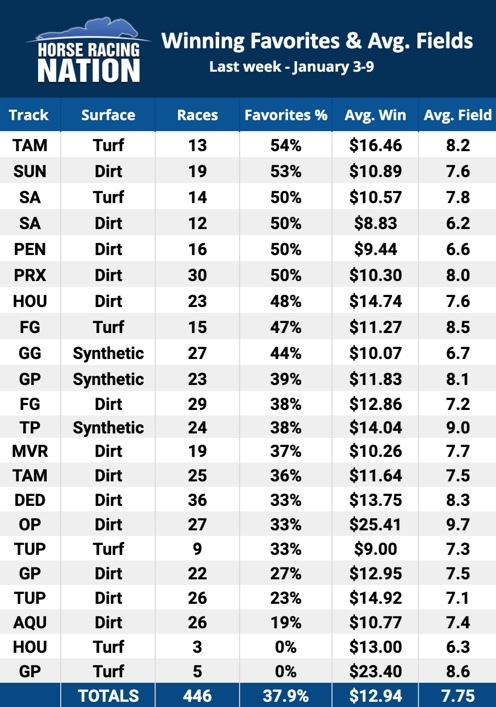 A quick glance at our favorites by track and surface chart shows that the public identified more winners at Santa Anita than almost anywhere else, as the chalk won 50 percent of all races there (13-for-26) evenly distributed over both turf (7-for-14) and dirt (6-for-12).

Racing Hall of Fame trainer Bob Baffert continued his domination of the Santa Anita trainer standings by going 2-for-3 on the week. Both winners were odds-on favorites on the dirt, and he now leads all conditioners with 11 wins.

Pennsylvania bettors had similar success, tabbing 50 percent winners at both Parx and Penn National where all races are currently on dirt.

Other leaders in winning favorites include Tampa Bay Downs turf runners (54 percent winning favorites) and Sunland Park dirt (53 percent). The overall winning percentages for the period was 37.9 percent, and no favorites won on turf at either Gulfstream Park (0-for-5) or Sam Houston Race Park (0-for-3).

Best places to price shop last week were Aqueduct and Gulfstream Park’s dirt tracks, where favorites won only 19 percent and 27 percent respectively. According to TV analyst and handicapper for the New York Racing Association Andy Serling, there didn’t seem to be any particularly random results at Aqueduct.  “Maybe some mediocre favorites, but we saw some win, and no outlier prices that I noticed,” Serling said. This could indicate that certain favorites were logical horses to bet against, and that Aqueduct is a great place for doing so. Another interesting result shown on the chart was Oaklawn Park’s average win payouts, higher than any other track at $25.41 thanks to a pair of $100-plus winners on Sunday. Even with 33 percent winning favorites, Oaklawn offered opportunities to score big last week.