How do six expert bettors feel about Essential Quality? 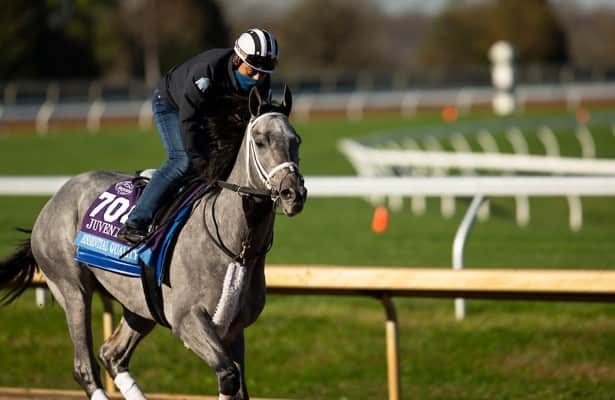 Out of sight often means out of mind for futures bettors on the Kentucky Derby. There is no better example than Essential Quality.

When last seen in an afternoon run, he answered all the questions with emphatic affirmatives in winning the Breeders’ Cup Juvenile. That was the final act of a campaign that won him the male 2-year-old championship.

Eclipse Award-winning trainer Brad Cox had hoped to end Essential Quality’s long break by starting him President’s Day in the Southwest Stakes (G3). Two blasts of winter weather extended the break. So they will try again Saturday at Oaklawn Park.

During Essential Quality’s nearly four-month break, the role of Derby favorite has been poached by Sham Stakes (G3) winner Life Is Good, who is poised to race yet again next week in the San Felipe (G2) at Santa Anita.

Was that the right move by bookmakers and bettors? What should be expected from Essential Quality when he begins his 3-year-old campaign? HRN posed questions along those lines to six respected handicappers and horseplayers.

Should Essential Quality already be the favorite for the Kentucky Derby?

Jonathon Kinchen, Fox Sports, 2015 National Horseplayers Championship Tour winner: “I am not offended by him being the favorite, but 2-year-old champs don’t have the best record. I think there is something to that. The Derby is about peaking on the first Saturday in May. Juvenile champs typically peak on the first Saturday in November. It reminds me of the big seventh-grader that dominates and sits the bench as a senior when the others catch up. Still, he is a quality animal, and I’m excited to see him run on ‘America’s Day at the Races.’”

Bruno De Julio, handicapper and workout analyst, WiththeWorks.online: “Essential Quality has something to prove this weekend as it has been nearly four months since we last saw him in the afternoon. My opinion in the question of his Kentucky Derby favoritism at this time and place is really unimportant until he performs next out. If he is the favorite it is merely Derby jargon for a distinction that every week is argumentative.”

Michael Beychok, 2012 NHC winner: “Essential Quality is a deserving favorite with 65 days until Derby 2021. His first race going six furlongs touted him as a special horse. He encountered trouble while well back, but once he got clear the stride lengthened quickly, and it was a visually impressive performance. When Essential Quality went around two turns for the first time at Keeneland it went as planned. He showed a bit more speed coming out of a six-furlong race and simply ran them off their feet. In the big test in the Breeders’ Cup Juvenile he ran wide the entire way but still had enough to power past in the stretch. He has checked all the boxes for a legitimate favorite.”

Thomas Goldsmith, 2020 NHC winner: “Winning the Breeders’ Cup, he earned his place to be the favorite.”

Joe Kristufek, racing analyst, TwinSpires.com: “Nobody deserves to be the Kentucky Derby favorite at the end of February, especially a horse who has yet to prove himself at age 3. Only two winners of the Breeders’ Cup Juvenile have ever taken down the Kentucky Derby, too. Some horses simply develop more quickly than others, both physically and mentally. For me they need to reprove themselves all over again.”

Considering the current futures market, what to you consider to be fair odds for Essential Quality right now to win the Derby?

Kinchen: “He was 8-1 in last month’s Kentucky Derby Future Wager pool, but isn’t he likely to be 5-1 on the day assuming the Bafferts keep winning? Are those three points worth the risk of him even getting to the gate? I would need 12-1 or higher.”

De Julio: “Are there fair odds for future-book betting? Look at Bezos and all the hoopla created before his debut. Essential Quality’s price and fair odds are all in the eye of the beholder of a ticket on him and what they are willing to spend. Full disclosure: I am not a future-book player.”

Beychok: “Fair odds to me would be around 15-1. There are just still too many snakes to jump over for a 3-year-old to get to the starting gate in 65 days. A lot of things could go wrong, and everything has to go right. Horses stabled at Oaklawn had hiccups because of the weather, while Essential Quality has been right on schedule at the Fair Grounds, never missing a work.”

What gives you confidence about Essential Quality, and what are your doubts about him?

Kinchen: “He is obviously well-bred, Eclipse Award-trained and the 2-year-old champion. My doubts really are just price and progression. Will he progress, and does his price warrant a wager?”

De Julio: “I think Essential Quality has yet to hit his peak as a racehorse, but on the flip side my doubts surround him being a Tapit and their lack of success in the Derby. I like a wait-and-see approach to a horse’s progression. I have learned over the years that horses favored in January, February and March are most likely to disappoint the player.”

Beychok: “If he gets to the gate for the Derby, I’m confident he will be the favorite – and deservedly so. My only doubts about him are the historical high jumps he has to clear to make the starting gate. Only two winners of the Breeders’ Cup Juvenile have won the Derby – Street Sense (2006-07) and Nyquist (2015-16).”

Coles: “Pros: Very strong connections, show versatility with his running style depending on pace, 2-year-old champ and undefeated with every right to improve off his 95 Beyer as a 2-year-old. Cons: Not sure if he’s beaten much yet, took advantage of sitting close to a very moderate pace – and closing into a hot pace in his last two route wins, hasn’t raced in months and always a fear that he peaked at 2.”

Goldsmith: “Let’s see his next race. He got the perfect set-up in the Breeders’ Cup, where they flew early. The pace should be honest, that they are not going to go crazy. I am still suspect about Jackie’s Warrior getting two turns.”

Kristufek: “He is a physically imposing specimen of a racehorse who has improved with every start. He has natural speed but is ratable, like we saw in the Juvenile. He’s in really good hands with Brad Cox, who will surely win a Kentucky Derby one day. Again, he still needs to reprove himself as a 3-year-old. Although he seems to have a good mind, he’s still by Tapit, who has never sired a Kentucky Derby winner.”

Beychok: “Brad Cox is a strong positive in his corner as he has won more big races in more places than any trainer not named Pletcher or Brown or Baffert over the past few years. Cox won the Oaks last year and is poised to win his first Derby with this champion 2-year-old. I wouldn’t bet on him at the short prices being offered. But I wouldn’t bet against him, either.”

Kristufek: “Essential Quality has been stabled at Fair Grounds, where Cox also has Risen Star winner Mandaloun. He didn’t want to run Essential Quality nine furlongs off the bench in the Risen Star. He’ll tackle the progression in distances after he gets this 1 1/16 miles race under his belt. Getting delayed two weeks to run in the Southwest didn’t do him any favors, but Brad will adjust accordingly.”

Coles: “Anytime plans for a Derby contender are delayed by a couple weeks, I worry about the effect on the goal of winning the Derby. This weekend will tell us a lot and show us whether he has taken that necessary jump forward as a 3-year-old.”