How Richard Schosberg stays busy after retiring from training 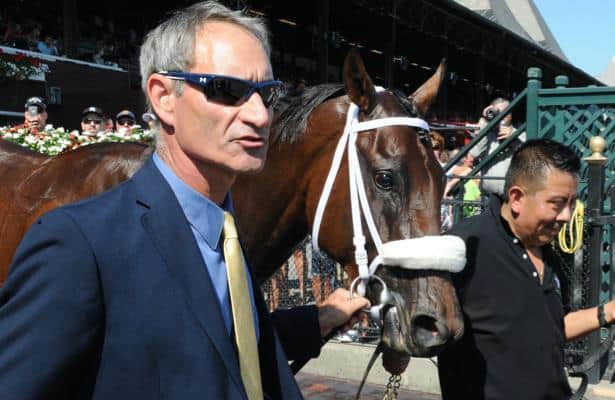 There is no rocking-chair retirement for former trainer Richard Schosberg. Other than allowing himself two more hours of sleep by pushing back his alarm to 5:30 a.m., he is almost as busy as ever since closing his barn at the end of last year.

Thoroughbred aftercare, work on behalf of New York trainers and time devoted to the Horseracing Integrity and Safety Authority are making for a full day.

Schosberg leads New York’s Thoroughbred aftercare programs. Take 2 is marking its 10th anniversary. TAKETHELEAD recently retired its 1,000th horse, with Schosberg at the forefront of many of those transitions. He is a member of the board of the Thoroughbred Aftercare Alliance and participates on a number of its committees.

He continues as vice president of the New York Thoroughbred Horsemen’s Association. His retirement helps to illustrate the difficult environment trainers with smaller barns face in attempting to turn passion into profit. He is involved with HISA as a member of its horsemen’s advisory committee.

Schosberg, 61, had trained on his own in New York since 1988, overseeing Grade 1 winners Affirmed Success, As Indicated, Maria’s Mon and Mossflower. He long has been vociferous on behalf of aftercare.

“Aftercare is all important to the entire industry. It is an industry responsibility to make sure these horses have a safe landing and a proper and purposeful retirement,” he said. “They don’t want to just be turned out in a field swatting flies or dodging raindrops. They really don’t. These horses are used to having a job.”

Schosberg is meticulous during the placement process. He makes sure to follow up with the hope that new homes become forever homes. He and those who work for him make certain that retirees do not fall through the cracks.

Schosberg also is doing everything he can to look after New York horsemen. He noted dramatic gains in reducing the cost of workmen’s compensation in the last five years. But increasing labor costs and soaring inflation are delivering a stiff one-two punch for those unable to keep pace with the massive operations of Chad Brown and Hall of Famer Todd Pletcher that dominate New York.

Schosberg cared for 12 to 16 horses last season. He acknowledged that the numbers simply did not work for him.

“I don’t know if I’m giving up income because I was pretty much breaking even, if that,” he said. “I’m not giving up any revenue by not training, let’s put it that way. It’s very, very hard to break even with a stable that size, it really is.

“It’s hard to win races in New York. The competition is very tough. The purses are great but with the cost of running the business, it’s almost like you had to be third to break even on the day.”

According to Equibase, Schosberg won at a 13 percent clip last year, saddling 12 winners from 94 starters with 15 runner-up finishes and nine third-place efforts. His runners averaged $10,179 per start and accumulated $956,827 in purse earnings.

He has always prided himself on his eye for a young horse and will represent clients at sales. He strongly believes that HISA is the most sensible way forward for an industry that has been hurt by its fragmented nature and public skepticism about a level playing field.

“Instead of having 38 jurisdictions and 38 different rules and regulations, this solidifies and brings together a solid set of rules that everybody in the industry has come up with based on scientific evidence,” he said.

He acknowledged that HISA is enduring growing pains but said, “In the long run, this is going to be good for the industry and a good program. The end game is to have the safest and fairest racing possible across North America.”

However that plays out, Schosberg is certainly doing his share to give back to the industry. And then some.