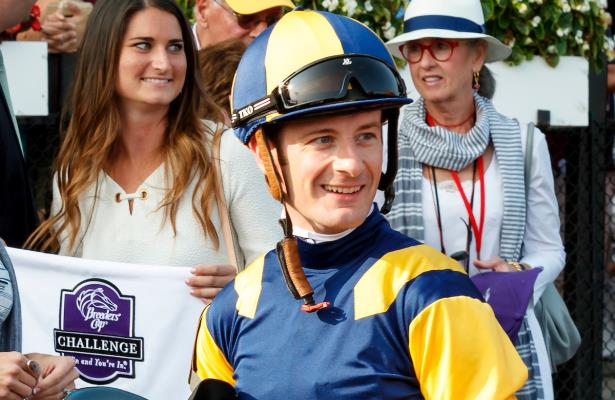 The New York Racing Association’s decision to close its jockey colony to outsiders is forcing a couple of Ellis Park riders to choose whether to stay in Kentucky for their daily business or commit to Saratoga to ride in stakes there.

NYRA said that, starting on Saratoga’s July 16 opening card, jockeys who have ridden at other racetracks will not be permitted to ride at the prestigious summer meet. That also will prevent jockeys from leaving Saratoga to ride stakes at other tracks because they will not be allowed to return.

The two Kentucky jockeys most impacted are Julien Leparoux, who is based at Ellis Park for the first time in his career, and Florent Geroux, who had started his second summer in Kentucky but who currently is sidelined after testing positive for COVID-19. Both jockeys figured to make multiple weekend trips to Saratoga and elsewhere to ride in stakes.

“That was the plan, to stay here,” said Leparoux, who has a young son starting preschool this year. “I don’t have that much at Saratoga, so I need to focus on my day-to-day business for the fall here in Kentucky. I’m not going to be able to go ride those stakes at Saratoga as planned, but that’s the way it is, I guess.”

Leparoux said he wholeheartedly supports rules and protocols to prevent the spread of COVID-19 but is disappointed there is no way for Kentucky jockeys to participate in any Saratoga stakes, even if it would require quarantining in upstate New York for a period of time before the race.

Ellis Park this week instituted a more flexible protocol that requires all jockeys and jocks’ room valets to have a negative COVID-19 test result within the prior 48 hours, starting with Friday's racing program. After that initial test, jockeys are free to ride elsewhere but must show another negative test upon their return to Ellis Park.

Among the stakes horses that Leparoux will miss out on is Churchill Downs’ Dogwood (G3) winner Four Graces, upon whom he’s 4 for 4 and who is headed for Saratoga’s Test (G1).

“I think it’s good that they’re limiting jockeys’ travel,” Leparoux said. “For myself, I’m not going to try to pick up a mount just to ride a stakes (out of state) when I’ve never ridden those horses. But when it’s a horse you’ve been riding, that’s where I’m bummed about it. Maybe you’re not traveling as much as in normal times. But you should be able to travel a little bit, where you have horses you’ve been riding and you want to keep them. It’s a tough time. It’s 2020, we’ve got to go with it.”

Geroux is undecided whether he’ll stay at Ellis Park or commit to Saratoga after he is cleared to ride again.

“I’ll have to see what horses are going where,” said Geroux, who said he feels fine and has no symptoms of COVID-19. “But I would think there’s more chance of me riding at Ellis Park than Saratoga.”