How Flightline's breeding led to his success 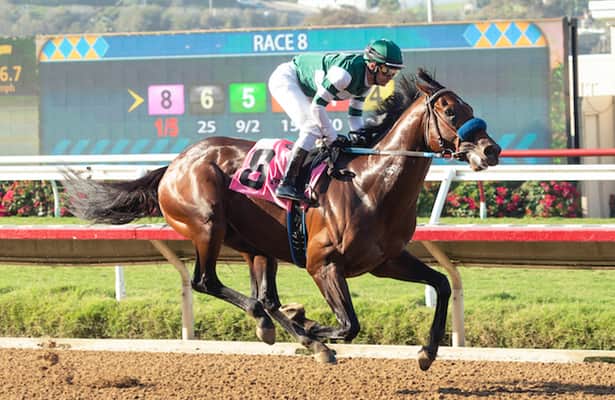 The breathtaking brilliance that is Flightline, winner of his first three starts by a combined 37 1/2 lengths, can be traced before his conception.

His story begins with his breeder, Jane Lyon, of Summer Wind Equine. Her unwavering commitment to excellence led her to spend more than planned to acquire Indian Charlie mare Feathered for $2.35 million at Keeneland’s 2016 November Breeding Stock Sale. She later paid a massive stud fee to send Feathered to renowned sire Tapit, resulting in Flightline.

“She’s got exquisite taste, and she breeds the best to the best,” said Bobby Spalding, Summer Wind’s general manager.

Lyon’s involvement helped attract Terry Finley, head of West Point Thoroughbreds, to Flightline. “Obviously, I’ve paid attention to her program. It’s a world-class program,” he said. “It’s a program that has stood out for quality over quantity, that’s for sure.”

Lyon, well known for her passion for horses, has proven over time that she is a breeder buyers can believe in. “It’s a select group that is going to bring a horse to auction that you have total confidence in from a mating and raising standpoint,” Finley said. “She definitely fits. She’s at the top of the list.”

Lyon believed in Flightline so deeply that she was willing to remain a partner for his racing career, helping Finley raise the $1 million it took to purchase the handsome yearling at the 2019 Fasig-Tipton New York Saratoga Select Yearling Sale.

“It means quite a bit when you are buying horses and me trying to get partners together when you can say the breeder is staying in for a pretty significant equity part,” Finley noted. “That really says something in so many different ways.” The partnership consists of Hronis Racing, Siena Farm, West Point, Summer Wind and Woodford Racing.

Lyon’s acquisition of Feathered was in keeping with her desire to assemble an outstanding broodmare band that produced 31 foals this year. “If you see all the mares she has here,” said Spalding. “It’s like a kid going to a candy shop. These mares here are unbelievable.”

Feathered, trained by Hall of Famer Todd Pletcher, displayed ample ability during her racing career. She earned $577,474 while winning the Edgewood Stakes (G2). She placed in three Grade 1 races – the Starlet, Frizette and American Oaks.

“Jane is very particular about what she buys,” Spalding said. “There are certain things she looks for. Number one is pedigree, number two race record, and number three conformation. They’ve got to have all three.”

Lyon, Spalding and Dr. Richard Holder, who enjoyed a distinguished career as a veterinarian, produce a short list of three potential stallions for each mare. “Whatever she decides, that’s what we go with, whether we like it or not,” Spalding said. In the case of Flightline, Lyon chose from among Tapit, Quality Road and Curlin.

She sure got it right. Flightline, trained by John Sadler, handled his first Grade 1 test with remarkable ease when he roared off by 11 1/2 lengths in the Dec. 26 Malibu Stakes at Santa Anita.

“There wasn’t any beating Flightline,” said Mark Glatt, trainer of last-place Dr. Schivel. “I don’t know how many will beat him or if he will be beaten.”

Glatt’s rave review went on, “Superstar may not even be the correct term. … Certainly that’s the most impressive horse I’ve seen run live.”

Feathered is now carrying a filly by Into Mischief.

“Terry Finley might not get a chance to buy that one,” joked Spalding. At least he might have been joking.