Amid tragedy, Belmont horsemen helped save lives in barn fire 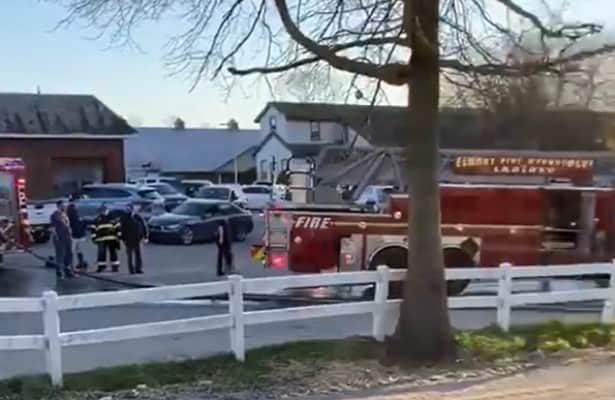 A heroic effort from horsemen, the Elmont Fire Department and New York Racing Association Inc. security personnel saved the lives of 58 horses after a quick response to Tuesday’s fire in Barn 60 at Belmont Park.

Barn 60’s alarm and sprinkler system immediately notified NYRA’s security personnel at Gate 6 at the onset of the fire. NYRA security notified the Elmont Fire Department, who were on the scene within minutes to extinguish the fire and secure the scene. The New York State Fire Marshal and officials from Nassau County are investigating the cause of the fire, which was not immediately apparent.

A team of horsemen rendered immediate assistance in conjunction with NYRA security to the horses stabled in Barn 60, which holds stalls for horses trained by Wayne Potts and Jeffrey Englehart.

“We are appreciative of the timely response of our security team, the Elmont Fire Department and the brave assistance of horsemen from the New York racing community who helped in the effort to safely evacuate horses,” said Glen Kozak, NYRA senior vice president for operations and capital projects. “We at NYRA offer our condolences to the connections of the two horses that died in this unfortunate accident. NYRA is continuing to work with the New York State Fire Marshal.”

"Due to really extraordinary efforts by first responders, the fire department, and staff here at NYRA, 58 horses were saved. Two horses perished but they did a really outstanding job,” said Cuomo.

Trainer Robert Falcone Jr., who has stalls in Barn 39, was among the first responders on Tuesday evening. He said he was on his way to the track kitchen, where he had parked his truck, when he saw smoke coming from Barn 60.

“I knew something wasn’t right, so I ran back to our barn and yelled to my team to grab shanks and halters and hurry up,” said Falcone.

He also took the briefest of moments to send a message out on Facebook, "We need all hands on deck at Belmont barn on fire if you are at belmont come to barn 60 now !!"

Falcone said at that time of the evening, most horsemen are at home.

“I thought I’d post it and that someone from the backside is bound to see it and once one person sees it, they’ll start calling people,” said Falcone. “It all happened very quick.”

Falcone said many horsemen arrived at Barn 60 to assist.

“Pablo Fragoso, a jockey, was there; ‘A-Rod’ from the gate crew was there; trainers Talie Lynch, Ray Handal and Brad Cox’s assistant Dustin Dugas all came to help,” said Falcone. “The outrider Miguel [Gutierrez], blacksmith Troy Lynch and so many others were there.”

Falcone said the brave group of horsemen navigated through smoky conditions inside Barn 60 to evacuate the horses working in tandem with Potts’ stable workers.

“It was really smoky in there,” he said. “We were trying to get through a shed row full of smoke and get into stalls of horses and you can’t see into the stalls. At the same time, there were horses without halters running down the shed row that you can’t see. As you’re running in and out, as soon as someone yells, ‘loose horse,’ you have to get against the wall because you don’t know where he’s coming from.

“As soon as we took the horses out, someone would take them from us and get them to a safe spot,” he continued. “Then we would go back in and get more and come back out again. We started using the cross bar [stall guard] when we ran out of shanks to run back in and keep getting them out.”

A chain of horsemen and security personnel worked together to safely evacuate the horses from smoky conditions and eventually bedded down in other barns across the Belmont backstretch.

“Dustin had 21 empty stalls on his side, so we started counting up horses and sending them over,” said Falcone. “It was pretty quick how fast we organized everything in that time frame and in those circumstances.”

Falcone said he and his staff didn’t think twice about rushing in to assist their fellow horsemen.

“There’s not many of us making a great living doing this. We do it for the horses and even when they’re not horses in your barn, when something happens everyone bands together so quickly,” Falcone said. “It’s not even a thought process, it’s just somebody needs help and go. We’re all here for one reason, and it’s because we love the horses.

“When something tragic happens, you always wonder if you could have done more,” he added. “But to be honest, I’m not sure we could have reacted much faster than that. We were hauling ass.”

Although it was an incredible team effort on the part of so many on the scene, Falcone did express regret that they were unable to save the Raj Jagnanan-owned American Sailor, a 9-year-old son of City Zip with 15 wins and more than $500,000 in purse earnings; and Beastie D, an unraced 3-year-old owned by Dan Eubanks.

“I feel so bad for the horses that died. I was in the stall with Wayne for American Sailor,” Falcone said. “Wayne was standing next to me and the horse was somewhere in the stall and you couldn’t even see each other. We were trying to get the horse out but it was impossible to see and communicate. We just had to get out of there. You can only stay in there for so long in all that before you’re going to pass out. I feel so bad we couldn’t get him out.”

Trainer Mertkan Kantarmaci, who has horses stalled in Barn 46 at Belmont, was one of the many to see Falcone's Facebook post and spring into action. The conditioner immediately called his foreman, Sergio Hernandez.

“I saw Robert's post on Facebook and I called my foreman immediately. He was in the dorm by my barn and I asked him to go by,” said Kantarmaci. “He called back and told me there were loose horses and I immediately started driving to Belmont.”

During Kantarmaci’s 25-minute drive to Belmont, a number of first responders were already onsite and affecting care.

“By the time I got to Belmont there were fire trucks and police and NYRA security all over the place,” said Kantarmaci. “I went to see Barn 60 first and to see if they needed help with loose horses. There were almost 200 people there to help. I'm very happy they were able to help all the horses in that big barn with 60 horses.”

Kantarmaci, who also shared the call for help on his Twitter account, stayed at Belmont late into the evening to offer his assistance and spend time with his staff and horses.

“I stayed longer last night and spoke to a few trainers who were out spotting horses,” said Kantarmaci. “It's all hands on deck when there's an emergency at the track. You have to go for the horse.”

Potts took to Facebook late Tuesday to issue a statement expressing his deep regret at the loss of two horses and his appreciation for the efforts of all who arrived to offer their assistance.

“I wanted to take a moment to express my sincere gratitude to everyone who assisted in removing my horses from the fire this evening,” he said. “Thank you from the bottom of my heart to every single one of you that put yourselves at risk to make sure 58 horses are able to see another day. The actions of so many this evening proved that this industry is a family with a fierce love of the horse that triumphs over anything else.”