How About Zero breaks through in Golden State Juvenile Fillies 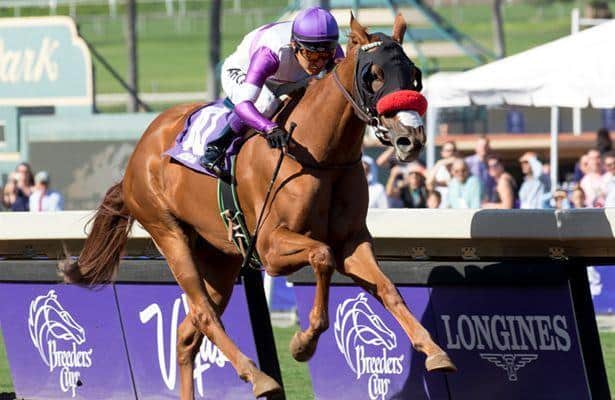 Winless in her first two starts, Reddam Racing’s homebred How About Zero broke through in a big way Friday at Santa Anita, as she took the $200,000 Golden State Juvenile Fillies by one length under Mario Gutierrez. Trained by Doug O’Neill, the California-bred daughter of Square Eddie got seven furlongs in 1:24.79.

Breaking from the far outside in a field of 10 California-bred or sired 2-year-old fillies, she settled nicely in mid-pack the first quarter mile and loomed boldly around the turn en route to victory.

A chestnut daughter of California’s leading stallion, Square Eddie, How About Zero is out of Reddam’s Too Much Excess, who is by In Excess. With the winner’s share of $110,000, she increased her earnings to $148,900.

Ms Wakaya, trained by Steve Miyadi, finished well under Kent Desormeaux and finished second, 3 ¼ lengths in front of Isa Firecracker. Off at 7-2, she paid $5.40 and $4.40.